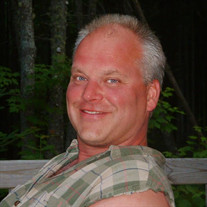 Paul Kenneth Alexander, 56, of Traverse City, formerly of Hancock, MI passed away September 16, 2019. Hero to his baby girl, warrior to his son, confidant, best friend, companion and soul mate to his bride, Paul leaves behind his legacy, his memories, his love and his family far too early. Paul was devoted, kind and without fail able to unconditionally love. He was the strength for all around him when they needed it and he was the support that was always welcomed and appreciated when life was just happening. On the back deck of the house in the woods is where you could find Paul and his wife Vickie (Gauld) enjoying one another’s conversation and company. He could always captivate a room with his gift of story-telling and his ability to make others laugh. He had a passion for the outdoors and could be found surrounded by nature most frequently. He had a deep appreciation for the simple things in life. He loved the trips that the entire family would take to their cottage up on Lake Superior and he and Vickie would dream of the day that they would retire back to the Upper Peninsula. His strong presence, his wisdom, his humor, his devotion to his family, his kind and gentle ways and his pure heart will be missed always but never forgotten. Paul leaves behind his wife Vickie, his daughter Abigail, his son Sam, his mother Eleanor, his sister Laura and his niece Lydia, his aunt Karen, as well as his mother and father in law Beckie and Dale Gauld and his sister in law Quincie (Don) Wend. Also missing him will be his beloved four-legged friend, Lou. They will all continue sharing, loving and remembering him. He is now joining his father Kenneth and dear family-friend and fellow Yooper, Billie Jo Clark. He’ll also be welcomed by other family, friends, and canine companions that too have moved on. The family is planning a small remembrance gathering in the future to celebrate his life. Those wishing an expression of sympathy in Paul's honor may choose to donate to the Humane Society of the United States or the Sierra Club.

Paul Kenneth Alexander, 56, of Traverse City, formerly of Hancock, MI passed away September 16, 2019. Hero to his baby girl, warrior to his son, confidant, best friend, companion and soul mate to his bride, Paul leaves behind his legacy, his... View Obituary & Service Information

The family of Paul Kenneth Alexander created this Life Tributes page to make it easy to share your memories.