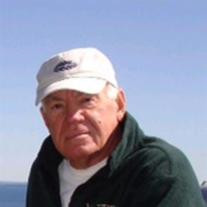 Paul William Brauninger, 69, of Traverse City passed away very unexpectedly Friday, August 03, 2012 at Munson Medical Center in Traverse City. Paul was born on Tuesday, December 29, 1942 the son of William Paul and Bernesteen Augusta (Watson) Brauninger. Following his graduation from Mumford High School in Detroit, Paul served our country as a member of the U. S. Army from 1961 until 1964 and then was a member of the Army Reserves until 1967. Paul continued his education after his discharge, earning a bechelors degree in industrial management from Lawrence Tech. On Friday, January 8, 1965, Paul married Patricia Mary Taylor in Detroit. In 1976 Paul and his family moved to Traverse City as Paul accepted the position of Controller at Cone Drive. He was employed there until 1988. Prior to his retirement he worked for Infor Inc., a software company. He was a member of the Elks, Trout Unlimited and enjoyed fishing, making fishing flys, fly and casting rods, reading and playing hockey. Paul especially enjoyed spending time with his family. He is survived by his wife Patricia, his children, Laura (Michael) Heitman of Albuquerque, N. M., John (Alison) Brauninger of Geyserville, CA, Carrie Brauninger of Denver, CO and his grandchildren, Caroline and Will Heitman and Brent and Lily Grace Brauninger. Paul is also survived by his brother Gene and his wife Dawn Brauninger of Walled Lake and many nieces and nephews. He was preceded in death by his parents. Paul will be remembered privately. No formal services or visitation will take place. Memorial contributions in Paul's name may be directed to The Yellowstone Park Foundation, 222 E. Main Street #301, Bozeman, MT 59715 or at www.ypf.org; The Grand Traverse Hockey Association, c/o Paul Brauninger Memorial Fund, P. O. Box 5713, Traverse City, MI 49696 or The National Wildlife Federation, 11100 Wildlife Center Dr., Reston, VA 20190-5362 or at www.nwf.org. You may share your memories of Paul as well as your thoughts and condolences with his family by way of his online guest book at www.reynolds-jonkhoff.com. The family is being served by the Reynolds-Jonkhoff Funeral Home and Cremation Services.

The family of Mr. Paul W. Brauninger created this Life Tributes page to make it easy to share your memories.