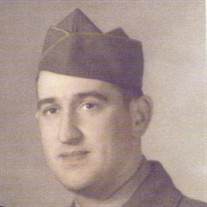 Paul Joseph Hansen passed away on Wednesday September 30, 2015 at Munson Hospice House in Traverse City at the age of 89 after a long and bravely fought battle with cancer. Paul was born on October 8, 1925 at the home of his parents, Carl J. and Helen (Logsdon) Hansen of Buckley, Michigan. On October 6, 1955 in Traverse City, Michigan, he was united in marriage to the former June Cecelia Hippensteel. On January 26, 1986, after 39 years, he retired as Building and Grounds Superintendent from the former Traverse City Regional Psychiatric Hospital. He was proud to have served his country during the Korean War in the Army’s 3rd Armored Division. He served 27 years in Local Government in Blair Township as Trustee and the Planning Commission as well as on the Bata Bus System Board of Directors for 6 years. He was well known as the Vance Road Handyman, ready to help any neighbor as well as family and friends needing help in carpentry, mowing or snowplowing. He especially enjoyed working with wood. He enjoyed R.V. traveling for over 30 years with his family. After retirement, he enjoyed the winters spent with his wife in Florida until health issues forced them to remain closer to home. He is survived by his wife June, daughter Kym (Dan) Duell, son Kory (Meghan) Hansen, 6 grandchildren, Jake Joseph and Luke Daniel Duell, Hayden Paul, Culley Hathaway, Hattie Cecilia and Clara Frances Hansen all of Traverse City. Sisters Lillian (Bill) Hartzell of Three Rivers and Marilyn O’Neill of Lansing. Sisters-in-law Marilea Hansen, Doris Hansen of Buckley and Virginia A. Smith of Traverse City. Also many nieces and nephews. He was preceded in death by his parents, sister Margaret Kolarik, brothers Armond, Vincent, Ted and Robert (Bob) Hansen. The family would like to extend deepest appreciation to Dr. Richard Kosinski, Dr. Robert Pacer, Nurse Rose and the Hines family for their care, help and thoughtfulness throughout a long difficult time. Visitation will be held from 3 to 5 p.m. Sunday, Oct. 4, at the Reynolds-Jonkhoff Funeral Home. Funeral services will take place Monday, Oct. 5, at 2 p.m., with visitation from 1 p.m., also at the funeral home. Burial will take place in Memorial Gardens with full military honors. Memorials may be directed to the Cowell Family Cancer Center or charity of one’s choice. Kindly share thoughts and memories with Paul’s family at www.reynolds-jonkhoff.com.

Paul Joseph Hansen passed away on Wednesday September 30, 2015 at Munson Hospice House in Traverse City at the age of 89 after a long and bravely fought battle with cancer. Paul was born on October 8, 1925 at the home of his parents, Carl... View Obituary & Service Information

The family of Paul Joseph Hansen created this Life Tributes page to make it easy to share your memories.