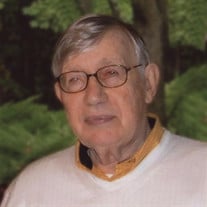 Paul A. Hazelton 1922-2015 Lifelong resident, architect and community leader, Paul A. Hazelton, died on May 30, 2015 at the age of 93 of natural causes. Married for 66 years, he is succeeded by his loving wife, Mary and their three sons, Glenn, Bill and Tom. A private family funeral was held on Monday June 1, 2015. There will be a public memorial reception later in the summer. Paul was born in Petoskey, Michigan to Glenn and Bertha Hazelton. He had one brother, Keith, who preceded him in death. Paul served in the U.S. Army Air Force during World War II as a B-17 pilot. He was awarded three medals including the Purple Heart and the Distinguished Flying Cross. After the war he returned to the University of Michigan where he received his Master's in Architecture in 1948. From 1950 to 1983 his firm designed many churches, schools and office buildings throughout northern Michigan. Among his major projects were the renovations to the Park Place Hotel, the National Bank and Trust Building, the original Chamber of Commerce Building, the Traverse City Golf and Country Club, Dormitories and Student Center for Northwestern Michigan College and the Traverse City Regional Airport Complex. Paul was very active in city and county politics and served on a number of boards including the City Planning Board and the County Commission. He advocated for the character and quality of life in Traverse City. He was instrumental in the acquisition and development of Marion Island as a county park in 1975. He loved spending time with family and friends, skiing, boating and fly fishing. In 1983 he closed his architectural office in order to focus on painting watercolors. Paul continued to paint natural scenes depicting the landscape of Northern Michigan until he went completely blind in 2006. Since then he has been writing his memoirs. Paul Hazelton will be missed by all who knew him and his legacy will be felt by the community for years to come. Please visit www.reynolds-jonkhoff.com to share your thoughts and condolences with the family. The family is being cared for by Reynolds-Jonkhoff Funeral Home and Cremation Services.

Paul A. Hazelton 1922-2015 Lifelong resident, architect and community leader, Paul A. Hazelton, died on May 30, 2015 at the age of 93 of natural causes. Married for 66 years, he is succeeded by his loving wife, Mary and their three sons,... View Obituary & Service Information

The family of Paul A. Hazelton created this Life Tributes page to make it easy to share your memories.