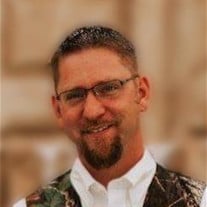 Paul Robert Henigan, 34, of Traverse City, passed away unexpectedly on April 6, 2018. Paul was born on December 12, 1983 in Traverse City to his parents James Dean Beutler and Sally Glass-Henigan, and was one of three children. Paul graduated from Buckley High School in 2002 and enlisted and proudly served in the U.S. Marine Corps. He married the love of his life Ashleigh Elizabeth Coyne on July 2, 2010 in Traverse City and the couple raised four children together. Paul enjoyed being outdoors, hunting, fishing, two tracking and most of all spending time with his family and friends. Paul was a hard worker and loving husband and father. Paul was an amazing friend to everyone and would do anything for anyone. He was always lending a helping hand. Paul was always smiling and making an effort to make others smile. He was the bright light in any room. Paul is survived by his wife, Ashleigh Elizabeth (Coyne) Henigan; sons, Noah James Henigan, Elijah Jacob Henigan, Westin Asher Henigan; daughter, Izzabella Malyn Henigan; mother, Sally Glass-Henigan; grandmother, Betty Beutler; sister, Shanda Weese; brother, Danny Henigan; many aunts, uncles, nieces and nephews. He is preceded in death by his father, James Beutler; grandmother, Helen Henigan and grandfathers, Ernie Beutler and Robert Henigan. Visitation will be held for family and friends on Friday, April 13, 2018 from 5 to 7 pm at the Reynolds-Jonkhoff Funeral Home. A funeral service will be held the following day on Saturday, April 14, 2018 at 3:00 pm at the funeral home with a visitation held one hour prior at 2 p.m. In lieu of flowers please consider contributions to Paul’s family c/o Reynolds-Jonkhoff Funeral Home. Please share your thoughts and memories with Paul’s family by way of his online guestbook at www.reynolds-jonkhoff.com. The family is being cared for by the Reynolds-Jonkhoff Funeral Home and Cremation Services.

Paul Robert Henigan, 34, of Traverse City, passed away unexpectedly on April 6, 2018. Paul was born on December 12, 1983 in Traverse City to his parents James Dean Beutler and Sally Glass-Henigan, and was one of three children. Paul graduated... View Obituary & Service Information

The family of Paul Robert Henigan created this Life Tributes page to make it easy to share your memories.