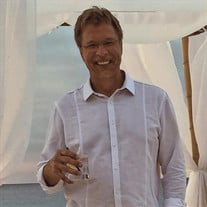 Traverse City – Paul Norman Kujala, 64, lived an exceptional life from December 13, 1952 to July 10, 2017. He entered into eternal life with family present, that which was most important to him. Born in Detroit, his family moved soon after to the Upper Peninsula and he spent his youth in Houghton. After graduating from Houghton High School, he attended Michigan Tech University. He served two years in the United States Army as a medical corpsman and was stationed at various bases both stateside and in Germany. Upon discharge, he resumed his education at Northern Michigan University earning a Baccalaureate of Science in Nursing. He then went on to earn a post graduate degree in Nursing Anesthesia at the University of Michigan. After nine years at Kalamazoo Anesthesia and a move to Traverse City, he assumed a position at Traverse Anesthesia, where he remained for the next twenty-six years. Paul’s passions in life took many forms. Serving others as an anesthetist both at home and abroad, mission trips to Guatemala and Haiti, volunteering for Safe Harbor, and funding the education for two students in Guatemala and Haiti were among his most rewarding experiences. Other passions included ice hockey, grouse hunting, traveling, skiing, and walks along the Great Lakes shoreline. Paul was a voracious reader and a loyal fan of Jeopardy. Through his experiences and job, Paul was blessed in establishing many meaningful friendships and was grateful for the love and support he received from them during his treatment for cancer, especially those from Bay Pointe and West Side Community Church, and work. It was faith and these friends that sustained him during this time. Paul is survived by his wife, Christine Lee; father Norman (Marge) Kujala; daughter Kirstin (Keith) Nielson; sons Nicholas (Jennifer) Kujala and Erik Kujala; stepdaughters Stephanie and Danielle Brzezinski; and six grandchildren Olivia, Tyler, Anna, Ella, Cecilia and Lucy. He is also survived by his brother Tom (Molly) Kujala and their four sons: Zachary, Tucker, Max and Sawyer, and multiple extended family members. He was preceded in death by his mother, June Kujala. Visitation will be held on Friday, July 14, 2017 from 4 to 7 pm at the Reynolds-Jonkhoff Funeral Home. The celebration of Paul’s life will be held on Saturday at 1:00 pm at West Side Community Church. In lieu of flowers, donations in memory of Paul may be made to Safe Harbor, Munson Hospice House or Safe Passage. Please visit www.reynolds-jonkhoff.com to share your memories and condolences with the family. The family is being cared for by Reynolds-Jonkhoff Funeral Home.

Traverse City &#8211; Paul Norman Kujala, 64, lived an exceptional life from December 13, 1952 to July 10, 2017. He entered into eternal life with family present, that which was most important to him. Born in Detroit, his family moved soon... View Obituary & Service Information

The family of Paul Norman Kujala created this Life Tributes page to make it easy to share your memories.