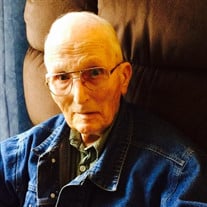 Paul S. Gibson, 88, of Traverse City, formerly of Mesick passed away from natural causes Sunday April 12, 2015 at Munson Medical Center. Paul was born on September 2, 1926 in Williamston, MI to the late Floyd and Ruth (Force) Gibson. He married his High School sweetheart the late Betty Rae Hill on April 27, 1946. Together they lovingly raised two wonderful children. Paul was an outgoing industrious man. After moving North to Beulah, he held several jobs until he became the Village Manager. Always a hard worker, he often worked the gas station on weekends. He was active in his children's lives including Church activities and Boy Scouts. Paul himself proudly earned the “Order of the Arrow.” For fun Betty and he became square dancers. He never thought there was a person he didn't know. In 1962 they decided to live the 'American Dream' and buy their own business. They bought a hardware store in Mesick. It was Gibson's Hardware for over 18 years. In Mesick they were very involved in the community, always thinking of ways to help others. He was a volunteer firefighter and a founding member of the Mesick Rescue Squad. Paul and Betty continued their dancing and took ballroom dance lessons. Through dancing they made many life long friends. Always active Paul also belonged to the Methodist church and the Mesick Lions Club. He always helped with the Mesick Mushroom Festival. After selling the hardware store they were able to winter in Florida. Later trips included Alaska, California, Arizona and the east coast. They loved these trips. He had been a resident of Tendercare Birchwood for the past three years. He made many people there smile . He loved all his caregivers. Surviving Paul are his children, Polly (Brad) Barnes, Roger (Nicole) Gibson, daughter in law Mandy Gibson, grandchildren, Paul Smith, Pamela (Mike) Helsel ,Patrick(Katie) Gibson, Jeffery (Jennifer) Gibson, Beanie (Marty) Send, Jamie (Issac) Clark, Austin Gibson. Zach Paulus, Cody Paulus, Grace Paulus, Tyler Kniss, great grandchildren, Alex, Sarah, Michael, Molly, Maribelle, Olivia,Lauren, Joey, Jackie, Jill, Bridgette, Joyce, Branden, and many other loving family members and friends. Paul is preceded in death by his parents, wife Betty, brother Keith and son-in-law David Smith. A memorial service will be held at 11am on Saturday, May 2, 2015 at the Reynolds-Jonkhoff Funeral Home. Memorial contributions may be directed to the Mesick Rescue Squad, the Scenic Trails Boy Scout Council or charity of their choice. Kindly share memories of Paul for the family to cherish at www.reynolds-jonkhoff.com The family is being served by the Reynolds-Jonkhoff Funeral Home.

The family of Paul S. Gibson created this Life Tributes page to make it easy to share your memories.