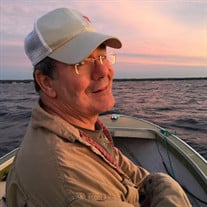 Paul Singer, of Traverse City passed away peacefully at his home on January 20th, 2021. He was born September 25th,1949 to John and Mary (Gabert) Singer who he cared for with strength and compassion throughout the final years of their lives. Paul was a passionate person who invested his heart in everything he did. After retiring from his insurance career, Paul spent his time and energy advocating for social justice causes alongside his wife of 47 years, Maggie. Together, they worked tirelessly to make a positive difference in the world as members of Indivisible and the Occupy (TC) movements. Paul was an avid sports fan and enjoyed watching and playing a variety of sports for most of his life; notably, he played hockey through high school and college, then joined a men’s league to compete leisurely into his 40s. Although his battle with MS prevented him from playing in his later years, he continued to be a fan and enjoyed watching the Detroit Red Wings, Tigers, and even the Lions. Paul often remarked that his children and grandchildren were the greatest accomplishments of his life; he was so proud of them and active in all their lives. He never missed a game, concert, or special event, and he could always be counted on to be present with loving support for anything his family ever needed, no matter what. For all those that knew him, Paul’s unique and oddly charming (if not always ‘appropriate’) sense of humor is likely the thing people will remember most. Any room with him in it would inevitably be filled with laughter. His humor, passion, generosity, and love will be deeply missed. Paul is survived and missed dearly by his wife Maggie, his children: Melanie, Aaron, and Meghan, grandchildren: Olivia, Nathan, Emma and Abe, brothers: Jayson, John and Eric and many extended family members and friends. The most treasured memories with Paul are family vacations: camping, fishing, canoeing and hiking the waterfalls and scenic views of Lake Superior in the Upper Peninsula. Paul’s family will be celebrating his life at some of their favorite spots from these vacations later this year. The Singer family have created a facebook page for those wishing to share memories . Those wishing to offer condolences are encouraged to contribute to The National Multiple Sclerosis Society in lieu of flowers. Paul and his family are being cared for by Reynolds Jonkhoff Funeral Home and Cremation Services.

Paul Singer, of Traverse City passed away peacefully at his home on January 20th, 2021. He was born September 25th,1949 to John and Mary (Gabert) Singer who he cared for with strength and compassion throughout the final years of their lives. Paul... View Obituary & Service Information

The family of Paul Singer created this Life Tributes page to make it easy to share your memories.

Paul Singer, of Traverse City passed away peacefully at his home...