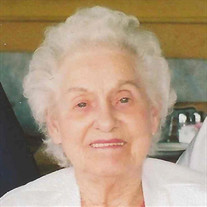 Pauline Bertha Barrett, age 97, passed away Monday, January 19, at Tendercare Traverse City (Michigan), where she lived since April of 2004. During her ten years at Tendercare, Pauline was an enthusiastic resident, fondly admired by the entire staff, and greatly appreciated the attention and professionalism provided by the entire staff. Pauline was born June 23, 1917, to William and Martha Hubenthal of Lucerne, Indiana. Upon graduation from Metea High School, she continued her education at Warner College of Beauty Culture in Fort Wayne, Indiana. Pauline owned and operated her own beauty shop for years. In 1939 she married John Barrett at her parents’ home in Lucerne, Indiana. Pauline and John moved to Traverse City in 1945. She and her husband opened Barrett’s Radio Headquarters on Front Street where they sold the first television in Traverse City. Later, together they owned and operated the Traverse City Recreation bowling alley until their retirement. Pauline was a longtime member of Bethlehem Lutheran Church. She enjoyed bowling, golfing, fishing, and playing cards. Pauline was preceded in death by her husband, three sisters, one brother, and one granddaughter. She is survived by one stepdaughter, Juanita Miller (Indiana), and four grandsons. Also surviving her are two nephews and one niece, all of Indiana. She will be missed by her best friends and caretakers Willard and Maxine Nielsen, Greg and Sue Talford, and godson John Nielsen, all of Texas. Graveside services will be held in late spring at Memorial Gardens in Traverse City. Cremation has taken place and memorials may be sent to benefit cancer research or an organization of your choosing. Arrangements are being handled by Reynolds-Jonkhoff Funeral Home.

Pauline Bertha Barrett, age 97, passed away Monday, January 19, at Tendercare Traverse City (Michigan), where she lived since April of 2004. During her ten years at Tendercare, Pauline was an enthusiastic resident, fondly admired by the entire... View Obituary & Service Information

The family of Pauline Bertha Barrett created this Life Tributes page to make it easy to share your memories.