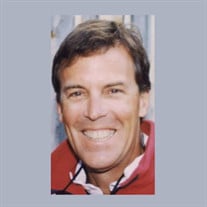 Peter Ford Anderson March 10, 1952 - December 23, 2021 Peter Ford Anderson, 69, died peacefully at home Thursday, December 23rd, surrounded by his loving children. He enjoyed his last days at his favorite place, looking at Glen Lake, with many visits by beloved friends and family, sharing stories, pictures, and laughs…and no shortage of pie. We have no doubt that Pete reunited with his wife and partner in crime of almost 35 years, Karen, who preceded him in death, and that the two had much to catch-up on (and may have even skinny dipped)! Best friends and partners in life, Karen has been patiently waiting for Pete for five years and certainly could not wait to see him. Pete was born on March 10th, 1952, in Akron, Ohio. A third generation Glen Laker, he was one of four children of Wayne “Andy” and Jane (Carpenter) Anderson of Akron, Ohio. He graduated high school from Phillips Academy in Andover, Massachusetts and went on to receive a journalism degree from the University of Michigan. After graduating, Pete found his way to Chicago where he received his MBA from Keller Graduate School of Management. It is in Chicago, after the annual Mackinac sailing race, that Pete met his future wife. Despite some initial musical disagreements (Pete’s favorite artist at the time was Boz Skaggs, Karen’s Elvis Presley…) Peter fell quickly in love with the woman with those blue, blue eyes. On December 28th, 1986, in Leland, Michigan, Peter married Karen (Daly) Anderson, daughter of Thomas and Helen (MacPherson) Daly, of Scotland. Karen and Peter had three children together, Ford, Stuart, and Taylor. In Chicago, Peter launched his successful 40+ year career in employee benefits consulting and eventually started his own consulting firm in 1992, FST Associates, named after his three kids. But Pete was most passionate about serving as a coach and mentor to those he worked with. Whether it was clients, employees, or even bosses, Pete took a genuine interest in the success of others and formed countless lifelong friendships as a result. He truly had an impact on so many (and collected such great friends!), and for that we will always be thankful. A passionate writer at heart, Pete reveled in storytelling - you could often find him at the center of a dinner party, engrossing his friends and family with tales of adventure and imparting wisdom. He was an avid traveler, passionate bird watcher, enthusiastic skier, devout golfer and consummate sailor. Pete had a heart for adventure but deep roots in and a passion for Glen Lake. He invested time and energy into the Glen Lake community in a variety of ways. Pete served as the Glen Lake Yacht Club Commodore, Board Member for the Sleeping Bear Gateways Council, and Glen Lake Association President. He never missed a 4th of July parade or the Old Settlers’ flag raising, and frequently hosted a cocktail cruise boat tour (and history lesson!) out on Glen Lake. He will be oh so missed. Peter leaves a loving son Ford and his partner Rebecca Copeland of Washington, D.C., daughters Stuart and Taylor of Chicago, sisters Jandy Kerby-Miller Sprouse and Ceci Shikles, and nephews and nieces Jack and Pete Kerby-Miller, Heidi Shikles Beier and Abby Shikles Manley, and Olivia, Maggee, and Hogan Daly. He was preceded in death by sister Debbie Steege Hill. A True and Proper celebration of Peter’s life will take place at 2pm on Sunday, May 29th at the Glen Lake Yacht Club. Bring a story, a photo, a smile. If you'd like to further share a memory, a thought, a photo with the family, you may do so at Peter’s email address [email protected] Those wishing to make a memorial contribution to remember Peter should select their favorite charity. Consider also Peter’s favorite charity the Glen Lake Association Watershed Protection Fund.

The family of Peter Ford Anderson created this Life Tributes page to make it easy to share your memories.