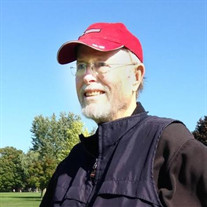 Peter William Bacon, age 75, of Elk Rapids Twp., MI, passed away Tuesday morning, April 26, 2016 at Munson Hospice House in Traverse City, after a long struggle with cancer and a brief but valiant fight following a heart attack. Peter spent the last week of his life surrounded by his wife, daughters, and sister. Peter was born in Midland, MI on October 11, 1940 to Kenneth and Evelyn Bacon. Raised in a house of music enthusiasts, Peter developed a love of classical music early on. He joined the high school band where he made lifelong friends and met his future wife, Sharon Mattes. He attended Albion College, where he studied economics and accounting. After marrying Sharon on August 18, 1962, the couple moved to Bloomington, IN where Peter pursued his masters and doctorate at Indiana University. He spent the majority of his teaching career at Wright State University in Dayton, OH, where he was a beloved University Professor and department chair, while helping to raise his four daughters. It is no small coincidence that a scholarship in his name, established at his retirement, seeks to support a non-traditional finance or financial services female student each year. While he was passionate about his work, he was equally passionate about his three favorite months of the year: June, July and August. During those summer days, he spent his time at "the cottage" on Elk Lake with his family, playing tennis, sailing on the lake, and soaking up the sun on the shore. He developed many friendships through those summer activities, and ultimately retired to that same house where he enjoyed participating in the community year-round through the Elk Rapids Golf Club, bridge groups, and Sacred Heart parish. In more recent years, Peter and Sharon escaped the cold of "Up North" by spending their winters in Tucson, Arizona where they enjoyed hiking in the desert, playing golf, and volunteering at St. Cyril of Alexandria parish to help feed the hungry. Peter is survived by his wife, Sharon, his four daughters, Maureen (Michael) Conroy, Julie (Luther Peacock) Bacon, Amy Smith, and Abigail (Jason Bergreen) Bacon; six, soon-to-be seven, grandchildren: Zachary, Nicholas and Jacob Smith; Rachel Redmond; Lucas Peacock; and Elizabeth Bergreen; and his sister, Carolyn (Thomas) McAnallen. Visitation will take place at Sacred Heart Church from 5 to 7 p.m. on Sunday, May 1 with vigil service at 7 p.m. Mass of Christian Burial will be celebrated Monday, May 2 at 10 a.m. In lieu of flowers, Peter's spirit may be carried on through donations to Munson Hospice House, A.C.T.S. or Father Fred Foundation. The family expresses sincere appreciation for the skilled, loving care provided by two Munson ICUs and the staff of Munson Hospice House.

The family of Peter William Bacon created this Life Tributes page to make it easy to share your memories.