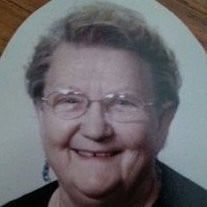 Petronella “Nellie” Bergier, 89 of Traverse City passed away peacefully on Wednesday, December 04, 2013 at her home surrounded by her loving family. Nellie was born on August 21, 1924 in Eindhoven, Holland to the late Adrianus and Johana (Norbert) Van Zundert. On November 27, 1948 she married the love of her life, Roman T. Bergier, in Wallasey, England. Sponsored to come to America in 1949, they became American citizens, and together they lovingly raised three wonderful children. Nellie moved to Traverse City in 1986 from Madison Heights. She was employed by Ford Motor Company as a seamstress. She retired after more than 20 dedicated years. Nellie collected Delft Blue pottery from Holland, Hummel figurines and spoons from her many travels and from friends’ travels. She loved to travel and read. She will be remembered as a person who loved to laugh, and she was positive in any situation. She can be seen singing a Dutch song with her sister in Holland via Skype: http://youtu.be/78ER2SlvCSg Surviving Nellie are her children, Roman M. (Kim Joy) Bergier, Steve (Melissa) Bergier, and Susan (Robert) Parkhurst; seven grandchildren, Stephen, Katherine, Nicole, David, Jeffrey, Lindsey and Stefanie; and five great grandchildren, Michael, Alek, Lauren, Tanner and Brook; her sister, Meintje, and other relatives in Holland. Nellie is preceded in death by her parents, husband, two great-grandchildren, Ryan and Talon; son-in-law Robert, and many other relatives. Per Nellie’s request cremation has taken place and a celebration of her life will be held at a later time. Please sign Nellie’s online guestbook at www.reynolds-jonkhoff.com. Donations may be sent to Hospice of Munson Medical Center of Traverse City http://www.munsonhealthcare.org or a charity of your choice.

Petronella &#8220;Nellie&#8221; Bergier, 89 of Traverse City passed away peacefully on Wednesday, December 04, 2013 at her home surrounded by her loving family. Nellie was born on August 21, 1924 in Eindhoven, Holland to the late Adrianus and... View Obituary & Service Information

The family of Petronella "Nellie" Bergier created this Life Tributes page to make it easy to share your memories.