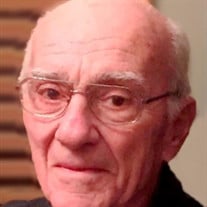 The beautiful summer day of August 3 was nearing its end when Philip Christos’s spirit was lifted into the arms of Jesus. After 90 years on this Earth, Phil took his final breath in his bed at his home in Cedar, Michigan with his bride of almost 61 years, Patricia, by his bedside and his only child, Lisa, holding his hand as she laid next to him. Philip Harold Christos Jr. was born in Chicago, Illinois, at the beginning of the Great Depression, on November 21, 1930 to Lillian Rita (Simulcik) Fangel and Philip Harold Christos Sr. He was raised by his mother with the help of his grandmother, Theresa, as his father left the family when he was very young. During his early years, Phil spent most of the school year in Chicago with his grandmother while traveling to Michigan in the summers to be with his mother, who was able to find work there. Sometime during Phil’s middle-school years he moved to Michigan permanently to stay with his mom. There, Philip attended Pontiac Central High School, where he loved being a member of the diving team. For his senior year he had to transfer to Waterford Township High School where he was the Valedictorian of its first graduating class in 1948. After high school he attended the University of Michigan for one year, before he ran out of money for tuition, room and board. He then worked various jobs prior to making the decision to enlist in the United States Marine Corp on February 5, 1951, during the Korean War. He initially tested into, and attended, the U. S. Naval Academy for one year before deciding that was not for him. He then proudly served out his enlistment and was honorably discharged from the Marines on February 4, 1954. Getting a good education was always Phil’s goal, both for himself and later for his only child. Following his discharge, he used the G.I. Bill to do just that. He attended Michigan State University of Agriculture and Applied Sciences for a short stint before finding the perfect learning program at General Motors Institute for his sharp mind and love of ‘tinkering’. He graduated from GMI with a degree in Industrial Engineering in 1960. During his time at GMI he met the love of his life, Patricia Marlene (Hebda) Christos. After their first blind date he informed Pat that he was going to marry her. She initially rejected the idea, but just six months later, on August 6, 1960 they were married at Our Lady of Refuge in Orchard Lake, Michigan and spent the next almost 61 years together. Their love was one for the record books with both totally devoted to each other. Phil’s only child, his “pride and joy”, Lisa Maree (Christos) Niergarth, came just 2 years later. Phil was an avid bowler and golfer. You would find him most Friday nights at Howe’s Lanes trying to reach that 300 game and again on Sunday evenings bowling with Pat and friends in the Firebird’s mixed doubles. Although he never achieved that perfect score, he came close with a 289. His weekends also included golf where he enjoyed riding in a cart with good friends and a beverage in hand while trying to figuring out where his ball had landed. Poker, euchre and cribbage were also some of Phil’s favorite pastimes. After completing a night of bowling, the gang of family and friends would often gather and continue the night with a competitive game of poker, or another of Phil’s favorites, either Hearts or Pepper. Crossword puzzles were also a daily activity for Phil as he loved to be challenged by Will Shortz, and Suduko became a mainstay after he was introduced to it by a friend in 2006. His love of tinkering and his engineer mind pleased many as he could fix or build most anything mechanical. After earning his degree, Phil continued to work at General Motors as a supervisor for a while and later opened his own engineering company, Phil Ray Corporation. He finished out his profession working as the General Manager at Allor Manufacturing. Many of those he worked with affectionately called him ‘The Mad Greek’ as he always pushed to get the job done, and done well. Throughout his career he built, repaired and designed countless machines and was involved in many projects, but he said that his favorite engineering project was building a life size windmill with his son-in-law, Steve, well after he retired. Phil never hung-up his level! Although Phil accomplished a lot and did a great deal during his life, he said his greatest joy and success was his family. He loved his wife Pat to the end and it was sad that he passed just prior to their 61st Anniversary. Being a good father was very important to him and what a wonderful father he was to Lisa. Many lessons were taught and valued. But the most important advice Phil gave to his daughter was to never give up and to keep trying until you reach your goal - something he did throughout his life. Phil is survived by his beloved wife Patricia; dearest daughter Lisa (Steve) Niergarth; three grandchildren, Nicholas, Natalie and Jacob; and the newest arrival to the family, his great-grandchild Jacob Steven, who Phil got to hold and love. He is also survived by numerous loving nieces and nephews. Philip was preceded in death by his mother, Lillian, step brother Burt (Phyllis) Fangel and his beloved dog Sully. The family is indebted to the team from Hospice of Michigan, especially his nurse Mary, for their loving and kind care and support during Phil’s final days. Phil was a wonderful gift to this world, and especially to his small family. A celebration of life will take place on August 14 with full military honors for family and close friends. In lieu of flowers, donations can be made to Hospice of Michigan or a charity of one’s choice. You can kindly share thoughts and memories with Philips’ family at www.reynolds-jonkhoff.com.

The beautiful summer day of August 3 was nearing its end when Philip Christos&#8217;s spirit was lifted into the arms of Jesus. After 90 years on this Earth, Phil took his final breath in his bed at his home in Cedar, Michigan with his bride... View Obituary & Service Information

The family of Philip Christos created this Life Tributes page to make it easy to share your memories.

The beautiful summer day of August 3 was nearing its end when...