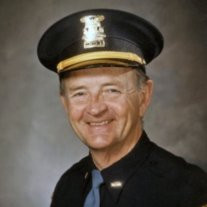 Philip Leonard Died Tuesday, November 12, 2013 *PHOTO* *FLAG* Traverse City - Philip Lee Leonard, 86, of Traverse City , died Tuesday, November 12, 2013 at Munson Hospice House in Traverse City. Phil was born on Monday, March 28, 1927 to the late Cornelius and Ruth (Bennet) Leonard in Nankin Township, near Plymouth, MI. Following his graduation from Lake Orion High School, Phil entered the U. S. Army, attending Command and General Staff College. He would serve our country as a member of the U. S. Army Military Police in the Army Reserves, retiring in 1988 as a Lt. Colonel. On Friday, May 13, 1949, he married the former Jacqueline Hazel Bertram in Lake Orion. Phil began his working career as a Police Officer for the City of Detroit in 1949 retiring in 1975. He served as Inspector in charge of the Youth Bureau in Detroit and retired as precinct commander. He then became Chief of Police for the City of Wixom, a position held from 1975 to 1988 Phil and Jackie traveled for 4 years and then moved to the Traverse City area in 1991. A member of The Presbyterian Church of Traverse City, Phil also held membership in the Kiwanis Club, Masonic Lodge, VFW Cherryland Posts 2780 and RSVP. He was an integral member of the Stroke Club, organizing and working with members for many golf outings. Phil enjoyed photography, volunteering for community projects, but most of all enjoyed fixing things for his daughters. Phil was not a person to be in the limelight, but one that worked from his heart. This is a special legacy that he has left for his family. Family has always been most important to Phil. He is survived by his wife Jackie of 64 years, his daughters, Brenda (George) Freeman of Ludington, Nancy Page of Harrison Twp., Sue (Jim) Lindsay of Ludington, Cyndi (Ed) Harris of Travese City, Denise (Joe) Meyers of Freesoil, 10 grandchildren, 11 great grandchildren; a sister, Janet Sala of Ft. Myers, FL and a brother, John (Caroline) Leonard of Leonard, MI., along with many nieces and nephews. Phil was preceded in death by his parents and 10 siblings. Phil's family will greet friends and relatives beginning at 12 noon Saturday, Nov. 16 at The Prebyterian Church of Traverse City, 701 Westminster, Traverse City. Visitation will begin at 12 noon followed by a Memorial Service which will begin at 1 PM, also at the church, with The Rev. Dr. William C. Myers officiating. Interment will be in the Garden of Remembrance at the church. The family would ask that memorial contributions be directed to Munson Hospice House c/o Munson Healthcare Regional Foundation, or to The Presbyterian Church. Please share your memories of Phil with his family by way of his online guest book at www.reynolds-jonkhoff.com The family is being served by Reynolds-Jonkhoff Funeral Home and Cremation Services.

The family of Philip Lee Leonard created this Life Tributes page to make it easy to share your memories.