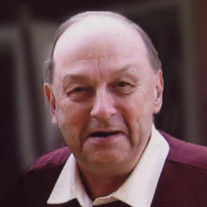 Traverse City—Philip Franklin Workman, who moved here in 2020 after living 20 years in Mason, MI, died April 21, 2021 at the age of 91. He was born January 22, 1930, in Detroit, the oldest of five children of Frank and Taimi Workman. He grew up in Hazel Park, just north of Detroit. He knew early on that he wanted to be a newspaperman and was overjoyed when he became a copyboy at The Detroit News at the age of 16. He earned a BA in Journalism from Ohio State University in 1952 and a MA in Political Science from Wayne State University in 1960. He served in the US Army 1952-1954. He met his wife Sharon (Price) Workman, in June 1950, while both worked at The Daily Tribune in Royal Oak, MI. They were married March 25, 1953, and raised six children over the years together in Berkley, West Bloomfield and Okemos, MI. She died on June 24, 2020. He worked 14 years at The Detroit News, leaving in 1966 as Chief Assistant City Editor to join the General Motors Public Relations Staff in Detroit. He was Manager of News Relations in Detroit for GM for 10 years before moving in 1982 to assignments as Director of Public Relations at Oldsmobile and Director of Public Affairs of the Lansing Automotive Division, both in Lansing. He retired in 1991 and that year received the Lansing Salvation Army Community Service Award. He was a charter member of the Detroit Press Club and was a member of the First United Methodist Church of Mason. He and his wife enjoyed travel in retirement, frequently visiting family in California and elsewhere. His family was his pride and joy and his grandchildren and great-grandchildren made life special. He is survived by four sons, Greg (Sue) Loveland OH, Jeff (Deb), Traverse City, Tim (Celia), Aliso Viejo, CA, Randy (Lisa), Aliso Viejo, CA, a daughter Krista (Tonio) Martinez, El Segundo, CA, two sisters Marianna (Ralph) Cowie, Bloomfield Hills, MI and Marilyn (Dennis) Benson, West Olive, MI, many nieces and nephews, 12 grandchildren and five great-grandchildren, sister-in-law, Marilyn Green, Big Rapids, MI, brothers and sisters-in-law, Gary (Sue) Price, Port Charlotte, FL and Kevin (Ellen) Price, Berkley, MI. He was preceded in death by his wife of 67 years, his parents, Sharon’s parents, a son Matthew, Berkley, a brother John, Chicago, a sister Sarah Groszko and her husband Don, Bloomfield Hills, and brother-in-law, Donald Green, Big Rapids. The family will plan a joint memorial service for both parents. You may visit Philip’s tribute page at www.reynolds-jonkhoff.com

The family of Philip Franklin Workman created this Life Tributes page to make it easy to share your memories.