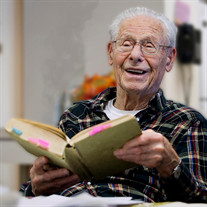 Phillips Hamlin Brown, 100, of Traverse City, died Monday night, February 4, at Willow Cottage of the Grand Traverse Pavilions. He was the father of Traverse City residents Fleda Brown (a Record-Eagle columnist) and Melinda (“Millie”) Putz, and of Michelle Griggs of Houston, TX. A profoundly disabled son, Mark Stephen, died in 1975. He had six grandchildren and twelve great grandchildren. Phillips was born April 29, 1918, to the distinguished economist Harry Gunnison Brown and his wife Fleda Phillips Brown, in Columbia, MO. That same year, his parents bought a cottage on Intermediate Lake in Antrim County, where he spent his summers. That cottage remains in the family today. On January 25, 1942, Phillips literally married the girl next door, Mable Francis Simpich, known to family and friends as Tancy. After a short honeymoon at Niagara Falls they settled in Cambridge, MA, for him to finish his MBA at Harvard. After finishing his degree, he was deployed by the U.S. Army to the Quartermaster Training Center at Camp Lee Virginia. He served from 1944-46, mostly in the South Pacific. Following his discharge, he taught briefly at Middlebury College, VT, and at the University of Akron, before returning to Columbia to complete coursework for the Ph.D. in economics at the University of Missouri. He stopped short of completing that degree, however, preferring teaching and building boats to further academic study. He taught at the University of Arkansas for eight years, during which time he gained a reputation for riding his bicycle to school before anyone did such a thing. He was asked to hide the bike in the bushes when he parked it. In 1961, he accepted an appointment at Southeast Missouri State University, in Cape Girardeau, MO, where he spent the remainder of his teaching career. He retired as Professor Emeritus in 1986. He was famous for riding his bike to school and all over town, tie flapping in the breeze. He was a founding member of the Velo Girardeau Bike Club. He won the award as the oldest member to complete the 100-mile “Century Ride” for the last time when he was 80. He won that award so many times that the Club named it after him. He was equally famous for his sailboats, designing and building five in his lifetime. His students started a rumor that “P. Brown,” as he was fondly called, had built such a big boat in his basement that he couldn’t get it out. Not true, but he did build one so big that he didn’t think he could get it to Michigan, so he sailed it for years on nearby Kentucky Lake. Phillips and Tancy never left their disabled son Mark out of anything. They took him to the lake, they cared for him together at home until the last three years of his life, when he needed more care than they could give. When Tancy died in 1996, Phillips began his twenty-year association with the Cape Girardeau Senior Center. He delivered meals every single day, often to recipients much younger than he. At the Center, he put the lunch menu up and was responsible for taking deposits to the bank. The last letter he ever wrote was to the Cape Senior Center staff. In 2015, when an unrepairable aneurysm required the amputation of one leg, his daughters moved Phillips to Willow Cottage of the Grand Traverse Pavilions in Traverse City, which turned out to be the beginning of another career. Always a great lover of poetry (he belonged to a poetry recitation group in high school), he was asked to read poetry to the residents. He would sometimes recite instead of read. Until his death, he could still say “Jabberwocky,” large portions of the folk ballad, “Abdul Abulbul Amir,” “The Highwayman,” and many other poems. He would alternate his readings with songs, often singing also from memory. He would type long lists of the poems he planned to use for the next Wednesday’s “Poetry with Phillips.” A manual typewriter was his lifelong companion, although he had learned to use a IPad to some degree. He liked to type out his opinions on the economy, his quarrels with Einstein and religion, as well as long, single-spaced letters to anyone who wanted to write to him. The family will gather at their cottage on Intermediate Lake this summer for a memorial service. Donations in his honor can be made to the Cape Girardeau Senior Center, www.capeseniorcenter.org .

The family of Phillips Brown created this Life Tributes page to make it easy to share your memories.