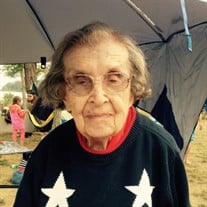 Phyllis S. Mansfield, who was one month shy of her 103 birthday, passed away peacefully to the tune of “Thank you for the music” by ABBA being sung to her by her family on January 23, 2022. Phyllis was born on February 23, 1919 in Cornwall, England to the late William R. and Jane (Murrish) Boyns. At the age of 5 she moved to Michigan with her family. Throughout her long life, she often remarked how thankful and proud she was to be an American. Phyllis was the valedictorian of the class of 1937 from Clarkston High School. She then went to Pontiac Business School and later worked at Pontiac Varnish Company. It was here that she met the love of her life, George William Henry Mansfield. The two married on March 11, 1939 and they shared 57 wonderful years together before he passed in 1996. Throughout their life they enjoyed many things including singing, attending church and spending time with their friends and family. Phyllis was a school secretary for many years in Clarkston. Music was a big part of her life. She was a member of the Central United Methodist Chancel Choir. She volunteered her time singing to Alzheimer’s patients and she used to call square dancing in her younger years. She also loved listening to Dixieland Music. She loved sports and enjoyed watching football, soccer, basketball and baseball. She especially loved listening to Ernie Harwell and cheering on the Tigers. Phyllis was happiest when she was surrounded by others. Whether it be family or friends, she loved making others happy. She was also known for her Cornish pasties, thanks to her famous crust recipe. Above all else, she cherished her family. Phyllis was preceded in death by her parents, husband, brother Howard, grandson Nicholas, son-in-law Jack and granddaughters-in-law Kate and Nancy. Phyllis is survived by her children Richard W. (Linda) Mansfield, Joan E. Boynton, James R. Mansfield, Cheryl B. Johnson; grandchildren Russell, Michael, Jason and Lindsey Mansfield; Rob, Jamey, Wendy, Marcus and Jared Boynton; Matthew Mansfield; and Zachary, Aaron and Janie Johnson; and 27 great grandchildren. The funeral service will be held on January 29, 2022 at 3:00 pm, with visitation beginning at 2:00 pm at the Reynolds Jonkhoff Funeral Home. Interment will take place in the spring in Clarkston. Memorial contributions may be directed to the Choir at Central United Methodist Church or to the Alzheimer’s Association.

The family of Phyllis S. Mansfield created this Life Tributes page to make it easy to share your memories.

Phyllis S. Mansfield, who was one month shy of her 103 birthday,...