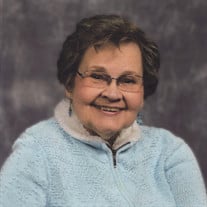 Phyllis Barbara Waisanen, 78, of Traverse City passed away peacefully on Sunday, November 23rd, 2014 at Munson Hospice House surrounded by her children and grandchildren. She was born Phyllis Jacobson on December 21, 1935 to the late Raymond and Dorothy Jacobson in Hancock, Michigan. She was married to Donald Edwin Waisanen on January 26th, 1957 in Detroit, Michigan. Together they raised four children and were blessed with five grandchildren and three great-grandchildren during their 57 year marriage. Phyllis graduated from Highland Park General Hospital School of Nursing in 1956 and became a registered nurse. She worked as a staff nurse and progressed to nursing supervisor status. She worked as a nursing manager at Munson Medical Center from 1973 until her retirement in 1994. After retiring from Munson, she worked for the Michigan Blood Program for ten additional years until 2004. Phyllis was involved in multiple community organizations including Bethlehem Lutheran Church, First Congregational Church, the TC Emmaus Community and she also volunteered for blood drives for Michigan Blood. Most recently she was involved in the Republican 912 Group. In addition she and Donald were active in their Amway business from 1979 until 2006 and they took many enjoyable trips with both Amway friends and friends from Don’s Kiwanis affiliation. Phyllis also played in bowling and golf leagues with her husband and co-workers throughout the years. Phyllis is survived by her four children; daughter, Lynne (Craig) McClure of Waterford, MI, sons; Dennis (Cheryl) Waisanen of Traverse City, Kenneth Waisanen and Glenn Waisanen both of Waterford, five grandchildren; Bryan (Heather) McClure of Waterford, Caitlin (fiancée Ted Clark) McClure of Warren, Devin McClure of Waterford, Sara (Colin) Smith of Traverse City, and Michael (Allie) Waisanen of Whitmore Lake. Phyllis also had three great-grandchildren; Madison, Mathew and Macie Smith all of Traverse City. She also leaves behind her faithful schnauzer, Radar. She was preceded in death by her husband, Donald and her parents. The family would like to extend a heartfelt thank you to the staff of A4 at Munson and Munson Hospice House for their care this past week. A memorial service honoring Phyllis will be held at 2:00 p.m. on Saturday December 6, 2014 at First Congregational Church, 6105 Center Rd, Traverse City, MI 49686, with visiting one hour prior. Rev. Dr. Gary Hogue will officiate. In lieu of flowers, the family has asked that donations be made to Munson Medical Center Heart Program or the Munson Hospice House. Please feel free to share your thoughts and memories with Phyllis’ family at www.reynolds-jonkhoff.com. Arrangements for the family have been entrusted to the Reynolds-Jonkhoff Funeral Home and Cremation Services.

Phyllis Barbara Waisanen, 78, of Traverse City passed away peacefully on Sunday, November 23rd, 2014 at Munson Hospice House surrounded by her children and grandchildren. She was born Phyllis Jacobson on December 21, 1935 to the late Raymond... View Obituary & Service Information

The family of Phyllis Barbara Waisanen created this Life Tributes page to make it easy to share your memories.