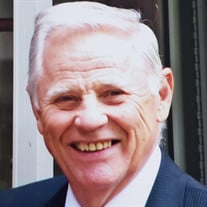 Proka “Koki” Baic of Traverse City, MI, passed away on August 5th, 2020, at 87. Born in Belgrade, Yugoslavia, on August 2nd, 1933, to Sofia and Milan Baic, he was their fourth and youngest child. In 1959 he married Gordana Baic, the love of his life, and they welcomed their only daughter, Olga, in 1962. With the help of his two older brothers, Koki immigrated to the United States in 1966 to give his family a better life. He became a U.S. citizen in 1973 and was always so proud to be an American. He once shared the common belief in Yugoslavia that America was a country full of gold. While he never found actual gold, he considered the people here and the friendships he made to be even more valuable. Koki retired in 1998 from Cone Drive, after almost 30 years as a draftsman and designer. In the office, he was affectionately known by all as “Cookie.” Outside of work, he loved channeling his design skills into woodworking and building. Always an incredible athlete, Koki was an avid cyclist, runner, and cross-country skier. In Yugoslavia, he competed on the national level in cross-country skiing and junior rowing. Koki was a wonderful storyteller and quick to make lifelong bonds wherever he went. He leaves behind close friends in the U.S., Germany, Yugoslavia, Australia, and Canada, including Zule Markovic, his best friend since Kindergarten. Above all, he was an adored and loving family man. He is survived by his wife Gordana, daughter Olga Topash (James), granddaughter Ashley Dominici (Dru), sister-in-law Maria Baic, and his favorite dog, Heisman. He is preceded in death by his sister Olga Champt (Marcel), and his brothers Nikola Baic and Vojin Baic (Pat). Koki is fondly remembered by his entire extended Baic family, including many nieces, nephews, grandnieces, and grandnephews.

The family of Proka Baic created this Life Tributes page to make it easy to share your memories.