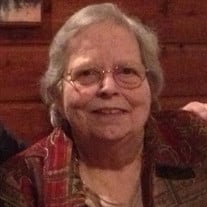 Prudence R. Kidd died on Tuesday, December 20, 2016 after a long fight with a blood disorder. She faced her illness like she lived her life, with class and grace. Prudy was born in Cleveland, Ohio in 1940. Her sister Judy came 2 years later. She grew up in Daisy Hill just east of Cleveland, attending the Hathaway Brown School. She attended Connecticut College in New London, CT where she met her husband Larry, a cadet at the US Coast Guard Academy across the street. Following graduation with a BA in Spanish, she married Lawrence Allen Kidd in 1962. She was the greatest wife and mother to three daughters, Jennifer Kidd, MD (Gerard Isenberg, MD), Elizabeth (Betsy) Kidd and Margaret (Cory) Beeler. Coast Guard aviation took them to Corpus Christi, TX, Traverse City, MI, Monterey, CA, Elizabeth City, NC, Washington, DC and finally back to Traverse City where Larry retired. Prudy surely didn’t. She continued to raise her 3 girls and feed much of the neighborhood where she was known for her excellent cooking and hospitality. The family tree farm became home from 1977 to the present, raising Christmas trees and farm animals for all 3 girls’ 4H projects. Prudy and Larry learned all about country living from great friends neighbors. Prudy’s many cousins the Wagenlanders and Greves provided a tight extended family. Prudy is survived by Larry, her three daughters and grandkids Zachary Kidd (Chicago), Ryan Isenberg (Brooklyn, NY), Jordan Isenberg (Ithaca, NY), Cameron Isenberg (St. Andrews, Scotland) and twins Alexis and Ashley Beeler (TC). She dedicated every day to family without concern for herself. Prudy gave her love and care to her friends and family, those lucky individuals touched by her life. She has earned her choice place in heaven. A memorial service will be held at Reynolds Jonkhoff Funeral Home on Saturday, January 7, 2017 at 3:00 pm with family and friend’s visitation prior to the service starting at 1:30 pm, Dr. Gary Houge will officiate. Memorial contributions may be directed to the Father Fred Foundation, 826 Hastings Street, Traverse City, MI 49686. Her family would like to thank the excellent staff at Munson Medical Center, the caring Cowell Family Cancer infusion team, the staff of Munson Hospice House and Dr. Zachary Hector-Word.

Prudence R. Kidd died on Tuesday, December 20, 2016 after a long fight with a blood disorder. She faced her illness like she lived her life, with class and grace. Prudy was born in Cleveland, Ohio in 1940. Her sister Judy came 2 years later.... View Obituary & Service Information

The family of Prudence Roberts Kidd created this Life Tributes page to make it easy to share your memories.