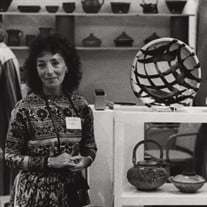 Rachel B. Jones, stoneware potter extraordinaire, and beloved Mom, left this world peacefully in her sleep very early in the morning of December 30th, 2019 at the age of 92 years and 4 months. Only a year previous, she had told her daughter... View Obituary & Service Information

The family of Rachel B. Jones created this Life Tributes page to make it easy to share your memories.