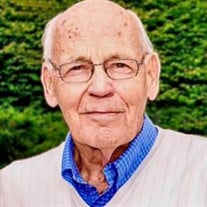 Ralph Bergsma of Traverse City passed away peacefully on January 12, 2021, at 89 years young. He was preceded in death by his son Brian Keith in 1977 and brother Donald James in 2009, and is lovingly remembered by his children, Kirk (wife Julie Bergsma), Eric (wife Sara Bergsma), and grandchildren Jillian Manning (husband Craig Manning) and Hunter Bergsma. Ralph was married January 30, 1954, to Lynda Jane Leaver, and the two were approaching their 67th wedding anniversary. Ralph was a husband, father, and role model with strong family values. He believed honoring one’s word and that a handshake was better than any legal document. He was an avid power boater and golfer, enjoyed hunting and fishing, and was an eternal optimist. Ralph was also proud to be an Eagle Scout with the Bronze Palm and serve as a U.S. Air Force 1st Lt. A graduate of Michigan State University (Landscape Architecture, 1953) and the University of Michigan (Architecture, 1959), Ralph had a celebrated and pioneering architectural career across the state. Locally, he was the project manager for Grand Traverse Resort and Spa, developing the master site plan, design of the first hotel building, and four condominium projects on the property. Ralph expanded his career into the Hospitality industry to become General Partner of the Waterfront Inn Resort Hotel and Conference Center (an additional property he designed) and President of RB Hospitality Management Co., the owner and operator of the hotel’s restaurant, Reflections, from 1983 to 2005. For more than 45 years, Ralph called northern Michigan home and was an involved member of his community. He served as Director of the Michigan State Chamber, Director of the Traverse City Area Chamber of Commerce, Co-Chairman of the Traverse City Area Chamber of Commerce New Designs for Growth initiative, Director of the Traverse City Convention and Visitors Bureau, and Director of the Gaylord Convention and Visitors Bureau. He also served as an Advisory member of East Bay Twp. Master Plan, Member of East Bay Twp. Planning Commission, member of the Traverse City Rotary Club, trustee of the National Cherry Festival, and a board member of the Traverse Symphony Orchestra and 10 year Sponsor of the Traverse Symphony Spring Swing fundraiser. Greater than all his accomplishments is the legacy he leaves behind. Ralph’s humor, generosity, and entrepreneurial spirit touched hundreds of lives in the community and live on in his family and loved ones. Ralph will be remembered with a private family ceremony: memorial contributions can be made to Munson Healthcare Regional Foundation. Please share any comments or memories with Ralph’s family at www.reynolds-jonkhoff.com. The family is being cared for by the Reynolds-Jonkhoff Funeral Home and Cremation Services.

Ralph Bergsma of Traverse City passed away peacefully on January 12, 2021, at 89 years young. He was preceded in death by his son Brian Keith in 1977 and brother Donald James in 2009, and is lovingly remembered by his children, Kirk (wife Julie... View Obituary & Service Information

The family of Ralph Thomas Bergsma created this Life Tributes page to make it easy to share your memories.

Ralph Bergsma of Traverse City passed away peacefully on January...