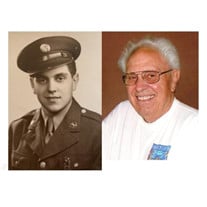 TRAVERSE CITY – Ralph James Cross, age 96, of Traverse City passed away on Saturday, December 5, 2020 at his home in the loving care of his family. Ralph was born March 2, 1924 in Detroit, MI to Earl and Clara (Gebhardt) Cross. Ralph had two brothers, Donald and Melvin and one sister Joan growing up in Detroit. Immediately graduating from South Eastern High School, he served four years during WWII from 18 to 22 years of age. He was in the 106 Army Division during training was then transferred into SHAEF (Supreme Headquarters Allied Expeditionary Force) under General D Eisenhower. Upon his safe return home in February 1946, he married Geraldine Schuster, and raised a family in Fremont, Michigan. In 1962, Ralph transferred to Traverse City as a manager of Wolverine Express. He was in the trucking industry until retirement. Ralph and Geraldine loved living on Old Mission Peninsula and enjoyed frequent trips to the Upper Peninsula and Canada. Ralph also loved hunting at his U.P. camp with his hunting buddies and son. Surviving is his son, James (Onna) of Bradenton FL, daughters Debbie (Eric) Johnson of Gaylord MI and Laurie (Michael) Schulte of Dorr MI. along with numerous grandchildren and great grandchildren. The grandchildren thought he was fun loving, goofy at times. They called him “silly grandpa.” Ralph was preceded in death by his wife of 70 years, Geraldine, his brothers Donald, Melvin and his sister Joan Keenmon, as well as his parents Earl and Clara Cross. The family would like to say thank you to Munson Hospice and Commission on Aging for taking such good care of him. A Mass of Christian burial will be held at 2:00 pm on Saturday, December 12, 2020 at St. Joseph Catholic Church on Old Mission Peninsula. Family will receive guests at 1:30 prior to the service. Ralph will be buried next to his wife immediately following mass at St. Joseph Cemetery where military honors will be held. In lieu of flowers Ralph’s favorite charities were to St Jude Children Research Hospital 262 Danny Thomas Pl, Memphis, TN 38105, and VFW Foundation 406 West 34th Street, Ste. 920 Kansas City, MO 64111,

TRAVERSE CITY &#8211; Ralph James Cross, age 96, of Traverse City passed away on Saturday, December 5, 2020 at his home in the loving care of his family. Ralph was born March 2, 1924 in Detroit, MI to Earl and Clara (Gebhardt) Cross. Ralph... View Obituary & Service Information

The family of Ralph James Cross created this Life Tributes page to make it easy to share your memories.