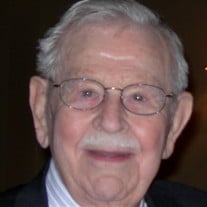 Ralph W. Rosenow, 96, of Traverse City passed peacefully with his family present on February 1, 2015 in the comforting care of Munson Hospice House. Ralph was born on September 20, 1918 to Fred and Augusta (Maas) Rosenow. He was a graduate of Eastern High School in Detroit. On October 11, 1941, Ralph married his bride Betty Jane Daykin at the Methodist Church in Highland Park, MI. He served his Nation in the US Army during World War II, and was present at the Battle of the Bulge. Ralph and Betty made their home in Traverse City for over 25 years, moving here from the Detroit area. In Detroit, Ralph supervised tool and die making for the Whitman and Barnes Company, and later used his talents working for Clymer Manufacturing. He loved golfing and watching his Tigers and Lions play. He took great pride and pleasure in maintaining his home, lawn and garden. Ralph is survived by his children, Ralph Rosenow, Jr. of Traverse City, Raune and her husband Bruce Lamborne of Arvada, CO, Kathleen Rosenow and her husband Frank Spevacek of Julian, CA; his grandchildren, Andrew and Peter of Colorado, and Ann, Robyn and Jill of California; and his great-grandchildren Matt, Jamie, Hannah, Lyric and Olive of Colorado. He was preceded in death by eight siblings, and his wife Betty. The family will receive friends and family at The Reynolds-Jonkhoff Funeral Home from 6-8 pm Friday, June 5, 2015. Graveside memorial services will take place Saturday June 6, 2015 at 11 am at Linwood Cemetery in Long Lake Township. Those wishing to make a memorial contribution in Ralph's name, may direct it to Munson Hospice House, c/o Munson Healthcare Regional Foundation, 1150 Medical Campus Drive, Traverse City, MI 49684 (231.935.6482) (www.munsonhealtcare.org/foundation).

Ralph W. Rosenow, 96, of Traverse City passed peacefully with his family present on February 1, 2015 in the comforting care of Munson Hospice House. Ralph was born on September 20, 1918 to Fred and Augusta (Maas) Rosenow. He was a graduate... View Obituary & Service Information

The family of Ralph Waldo Rosenow created this Life Tributes page to make it easy to share your memories.