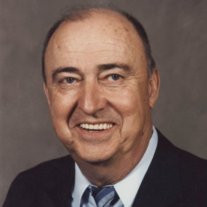 "There but for the grace of God go I." On December 12, 2013 the lord called to his sacred heart, Ralph Thomas Thorpe of Traverse city, Michigan. Ralph was born in Pittsburgh, Pa to John & Mary Thorpe (Davis) on 11/6/1929. He was the younger brother to Jack and older brother to sister, Leah (Page). Ralph was a self confessed "jock". He never met a sport he didn't like and excelled at them all so much so that he lettered in 4 sports at Findlay University. He graduated with a teaching degree with an emphasis in Theology. He later would be inducted into the school's Hall of Fame for Basketball. He was offered two tryouts from 2 professional sports team and ironically basketball wasn't one of them! Ah, but professional sports was not on his mind after graduation. Ralph met the love of his life when one of his city league baseball teammates introduced him to his sister, Rosalyn Daley. Ralph confesses that he knew immediately that his life would never be the same without her in it. He married her on Aug 15. 1953 in Lima Oh Their 60 years provided a great journey both physically and spiritually. Their travels took them from Lima, Ohio where all 7 of their kids were born, to Ft Wayne, Ind, Bismarck, ND, Sussex, Wisc, Coldwater, Mich and finally to Traverse City, Mich which they have called home for the last 35 years. Ralph had held many positions in the food brokerage business over a 40 year career. When he retired, many years ago he had owned and operated his own food brokerage business. Ralph never met a stranger. His persona was larger than life. If you wanted to add a mix of fun to any occasion, you invited Ralph. If his quick wit didn't do the trick, he could always jump on a piano and tickle the ivories and have everyone singing and dancing in no time! Ralph brought great joy and comfort to Grand Traverse area residents as he was an accomplished pianist who played literally thousands of funerals, weddings and masses during his time in Northern Michigan. His most recent service was at St Joseph's in Old Mission. His spiritual journey would likely be a separate article onto itself but he was most proud of starting and leading the "Our Lady's Prayer Group". It began in 1989 after Ralph & Rose made a pilgrimage to Medjugore and upon their return dedicated their lives to the blessed mother. The group continues their devotion to this day. Ralph was a soldier for all of the area catholic churches. If Ralph was needed, his contribution was implicit at the drop of a hat. All of the churches were special to him since he first directed the choir at St John's in Lima but the Carmelite Monastery of Traverse City held a special place in his heart. He and Rose spent countless hours administering to whatever needs these special nuns required. His devotion was so intense that none who knew him found it coincidental that Ralph passed on the Catholic feast day of "Our Lady of Guadalupe". Ralph was preceded in death by his father and mother, John & Mary and a brother, John. He is survived by the eternal love of his life, Rose (Daley). a son, John (Michelle) of Austin, Tx Son, David of Clinton, Okla. Son, James (Becky) of Dickinson, ND. Son, Paul of Dallas, Tx. Son, Robert (Debbie) of Dallas, Tx, son, Tony (Pamela) of Nashville, Tn. last but not least his daughter and musical accompaniment, Margaret Rose "Margo" of Traverse City, for whom he gushed with pride. Ralph is also the proud grandpa to 23 grandchildren and 5 great grandchildren. A memorial service and rosary honoring Ralph will be held at 7:30 p.m. on Monday, December 16, 2013 at the Reynolds-Jonkhoff Funeral Home. Deacon Rene Hoenscheld will officiate. Friends are welcome to visit with Ralph’s family on Monday at 6:30 p.m. In lieu of flowers those planning an expression of sympathy may consider donations to the Carmelite Monastery. Please feel free to share your thoughts and memories with Ralph’s family at www.reynolds-jonkhoff.com. The family is being served by the Reynolds-Jonkhoff Funeral Home and Cremation Services.

"There but for the grace of God go I." On December 12, 2013 the lord called to his sacred heart, Ralph Thomas Thorpe of Traverse city, Michigan. Ralph was born in Pittsburgh, Pa to John & Mary Thorpe (Davis) on 11/6/1929. He was the younger... View Obituary & Service Information

The family of Ralph Thomas Thorpe created this Life Tributes page to make it easy to share your memories.