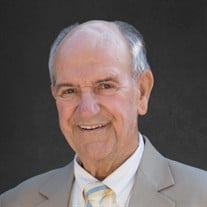 A longstanding and respected Traverse City businessman and former owner of Petertyl Drug, Ralph E. “Boots” Wolff, Jr., passed away peacefully on Monday morning, June 1st, 2020. He was just 18 days shy of his 92nd birthday. Boots was born on June 18, 1928, in Muskegon, Michigan to R. E. Wolff, Sr., and Sarah Elizabeth (Wirkler) Wolff. The oldest of 7 children, he was raised in a close and loving Catholic home, and he had many fond memories and stories of his childhood years. He still remained close with his siblings over the years, even though they were separated by miles. He graduated from Traverse City Central in 1946, and went on to attend Michigan State University. He was engaged to the love of his life, Barbara L. “Bobbie” MacIntosh, during those years, and she attended nursing school in Lansing while he was at MSU. They married on March 22, 1950 at Traverse City St. Francis, and both of them soon afterwards graduated from their respective schools, with Boots receiving a B.S. in Chemistry and Barb receiving her RN. Boots went on to further his education at University of Michigan, graduating in 1953 from the School of Pharmacy. He remained an avid Wolverine fan throughout his life, but Barb was a Spartan fan - a house divided. It made for some interesting times at their house during football season. He and Barb started a family while they lived in Ann Arbor, and moved back to Traverse City in 1953. He began working at Petertyl Drug, upon his return home. Eventually, he purchased the drugstore from the owner, Milton “Butch” Petertyl, in 1968; and in 1993, the store was bought by Boots’ son, Jim, who retained ownership of the store until it’s closing in 2018. Boots was a founding member of the Traverse City Downtown Development Authority, and he served on their board for thirty one years, as well as being a member of the Traverse City Downtown Association. He was active in local and state pharmacist’s associations, the Rotary Club, the Parish Council at Traverse City St. Francis, and he was a Boy Scout leader. During the time in which Boots and Barb raised their family of six boys, they also enjoyed many family and social activities. They were members of the Traverse City Golf and Country Club. Boots absolutely loved any outdoor activity, especially spending time on their beach on the Old Mission peninsula with family and friends. Boots also loved playing golf, gardening, skiing, travelling, stamp collecting, playing cards, reading history and non-fiction books, family outings, holidays, and a yearly trip to go to deer camp with his buddies. Best of all, he said, his most favorite activity was “spending time with my wife”, and they recently celebrated their 70th wedding anniversary on March 22. Boots was most proud of his six sons, all of whom achieved the rank of Eagle Scout. He was also proud of the fact that all of them went on to obtain degrees from universities in many different fields, and that they have successful careers. The legacy which he leaves behind is a life well-lived and well-loved, a servant’s heart which he passed on to his boys, an unending willingness to put other people ahead of himself, and a spirit of volunteerism for the good of his community and his family. Boots is survived by his wife, Barbara, and six sons and their spouses: Cameron and Valerie of Sunbury, Ohio; Kirk and Beth of Carmel, Indiana; Jim and Dixie of Traverse City; Jeff and Peggy of Reno, Nevada; Robert and Teri of Traverse City; and William J. (“BJ”) and Janet of Traverse City. He also leaves behind eleven grandchildren: Sara Fox, Danielle Wolff, Kent Wolff, Rob Wolff, Ryan Wolff, Erin Bach, Allen Wolff, Eric Wolff, William Miceli, Audrey Wolff, and Ben Wolff. He has six great-grandchildren as well. Boots was a very devout Catholic, and a member at Traverse City St. Francis for many years. Towards the end of his life, he and Barb joined St. Joseph Catholic Church on the Old Mission, where he was an altar server. His private service will be held there on Monday, June 8th, 2020 at 11:00 a.m. Memorial contributions may be directed to St. Joseph Catholic Church. For friends wishing to watch via live stream please go to: https://www.youtube.com/c/StJosephCatholicChurch or https://www.facebook.com/StJosephChurchOMP or https://stjosephtc.org/ Kindly share thoughts and memories with Boot’s family at www.reynolds-jonkhoff.com. The Wolff family is being cared for by the Reynolds-Jonkhoff Funeral Home.

The family of Ralph E. "Boots" Wolff, Jr. created this Life Tributes page to make it easy to share your memories.

A longstanding and respected Traverse City businessman and former...