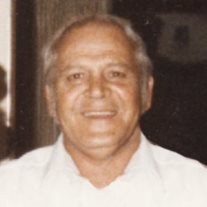 TRAVERSE CITY – Raymond R. Bissell, 82, of Traverse City, MI., passed away on Feb.25, 2014 at Traverse Victorian Senior Living Center. Ray was born in Detroit on Aug. 15, 1931 to Jacob Cyril and Mildred (Pierce) Bissell. He was raised in Detroit and Shepard, Mi. In 1952 he joined the U.S. Army Signal Corps, served in the Korean War, and returned home as a Sergeant in 1954. He attended Central Michigan and, in 1956, began working for Michigan Bell Telephone Co. He retired as a Repair Foreman in 1987 after 31 years. In 1952, he married Marlene Downing and together they raised their family in Midland. Ray loved sports and was an avid golfer, bowler, fisherman, hunter and softball player. In 2003 he was inducted into the Midland County Sports Hall of Fame as a member of the 1964 Nick’s Fastpitch Softball, Class A Team. Divorcing in 1979, Ray moved to Sault Ste. Marie and, on Sept. 10, 1982 he married Linda C. (Chris) Hershelman in Marion, Virginia. Moving to Traverse City in 1984, Ray continued to enjoy hunting, fishing and golf. He had two holes-in-one to his name as he played in his retirement. In later years, Turtle Creek Casino and pinochle at the Eagles along with many westerns and war movies provided entertainment. Win or lose, he was a faithful fan of the Detroit Tigers, Lions and Red Wings. He was a member of the American Legion Post 165 of Midland, the VFW Post 2780, the American Military League in Traverse City and the Fraternal Order of Eagles Aerie 383. If you were lucky enough to know Ray, you knew that you couldn’t have a more loyal friend. He also liked a good “discussion”. Ray was a special person with a wicked sense of humor. He will be sadly missed by many friends and family. Raymond is survived by his loving wife, Chris; a son, Rick Bissell and wife Rosemary of Brighton, MI., daughter, Diane Bissell, of Portland, MI., sister, Marge (Robert) Dunne, of Sterling Heights, MI., two granddaughters, Samantha (Denny) Abraham and Chelsea Bissell; grandsons, John Carley and Paul Carley; sisters-in-law, Jan Battaglino and Lynn (Ron) Thompson; brother-in-law, James (Lisa) Hershelman, and numerous nieces and nephews. Ray was preceded in death by his beloved sister, Shirley Jean Harry and brother Paul Bissell. He will be sorely missed by his “little man”, Yogi. In accordance with Raymond’s wishes, there will be no funeral service and cremation has taken place. Please feel free to share your memories of Ray by visiting www.reynolds-jonkhoff.com Arrangements for the family have been entrusted to Reynolds-Jonkhoff Funeral Home and Cremation Services.

The family of Raymond R. "Bubba" Bissell created this Life Tributes page to make it easy to share your memories.