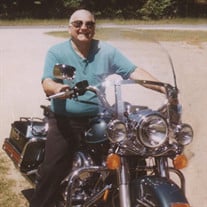 Raymond “Ray” Joseph Burns, 88, of Traverse City, passed away Tuesday, June 2, 2015 at Home. Ray was born as one of 11 children on December 17, 1926 in Arcadia to the late Joseph and Laura (Overholt) Burns. He married the late Gertrude Johnson on October 17, 1945 in Traverse City. Together they lovingly raised five wonderful children. Ray was a hard worker and devoted family man. He worked at Morgans, Cherry growers, and lastly Tower Automotive for many years as a press operator. Ray was one of the original property owners on South Airport Road making his home there since 1949. Mostly Ray enjoyed working on cars and proudly riding his Harley up into his 80’s. Surviving Ray are his children, Roger (Karin) Burns of Petoskey; Diana Taylor of Kentucky; Caroline (Jeffrey) DeVincent of Traverse City; Robert (Nancy) Burns of Traverse City; and Evelyn (William) Kreusler of Ohio; 12 grandchildren, many great-grandchildren and siblings, Bernita, Maxine, Irene, Frankie and Lawrence. Ray is preceded in death by his parents, daughter, Barbara in infancy, wife, Gertrude and siblings, Winnie, Geraldine, Chester and Eugene. Visitation will be held on Thursday, June 4, from 4 p.m. - 7 p.m. at the Reynolds-Jonkhoff Funeral Home. Funeral services will take place on Friday, June 5, at the Church of the Nazarene at 2 p.m. with a visitation beginning at 1 p.m. Burial services will take place at the Grand Traverse Memorial Gardens. Memorial contributions may be directed to the church. Please sign Ray’s online guestbook at www.reynolds-jonkhoff.com.

The family of Raymond Joseph Burns created this Life Tributes page to make it easy to share your memories.