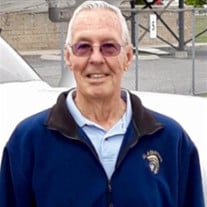 Raymond "Ray" Franklin Duell, 82, of Traverse City, passed away peacefully on the morning of Nov. 23, 2019, with family at his side. Ray fought a long and courageous battle with cancer. While he is already deeply missed, we are grateful that he is suffering no longer. Ray was born on Sept. 17, 1937 to the late Ivan and Irene (Middaugh) Duell in Wexford County. Ray was raised in Traverse City. It was here where he developed his love and passion for hunting, fishing and desire for the outdoors. He loved animals, so much that he had just about one of every kind throughout the years. From ostriches to horses, Ray had them all. Above all, his family was everything to him. He was as family-oriented as they come. Ray was an extremely hard worker. As a loyal employee he essentially had three jobs in his life, Morgan-McCool (what is now the Open Space), Grand Traverse County Road Commission and Casalae Farms. He was also a member of the Knights of Columbus, usher at St. Francis Catholic Church, headed-up the SF food pantry and managed the South Pines Campground at the Buckley Steam Engine Show. He was a patient teacher, coaching all of us in one way or another. The world would be a far better place if there were more men like him in it. Saying Ray was a dedicated and steadfast man with absolutely everything and everyone in his life would be an understatement. His devotion to God and the Catholic church was profound and at the center of his life; we are confident his servant's heart is at rest in heaven. Ray is survived by his faithful wife of 60 years, Rose Marie (Reamer) Duell; sons, Daniel (Kym), Steven (Karen), Scott (Jill) and Richard Duell; grandchildren, Jake and Luke Duell, Collin and Colton Duell, Nathan (Brittany), Zachary, Skyler and Olivia Duell and Sarah (Ryan) Fuller; great-grandchildren, Mason Ray Fuller and Liam Scott Duell, as well as another bundle of joy due in April; Roger Miller and Ron Waukazoo, also included in the family. Ray is also survived by his four siblings, Fred (Lorene) Duell, Flossie Bauer, Josie (Gene) Swainston and Rosellia Wooley. Ray was preceded in death by his parents; sister, Joyce Kroupa; and stepdad, Paul West. A Mass of Christian Burial will take place at 11 a.m., with a visitation beginning at 9:30 a.m., on Saturday, Nov. 30, 2019 at St. Francis Catholic Church. Father Don Geyman will preside and Father Kenneth Stachnik will con-celebrate. A luncheon will be held immediately following Mass at the St. Francis Catholic High School cafeteria. Ray will be laid to rest at St. Mary Hannah Cemetery in Kingsley at 4 p.m. on Saturday. Memorial contributions in Ray's honor may be directed to; National Fragile X Foundation, 1861 International Dr., Suite 200, McLean, VA 22102; St. Jude Children's Research Hospital, 262 Danny Thomas Place, Memphis, TN 38105; or St. Francis Catholic Church, 1025 S. Union St., Traverse City, MI 49684. The family would like to thank Dr. Andrew Riddell and everyone at the Cowell Family Cancer Center and Infusion Clinic for their excellent care for Ray.

Raymond "Ray" Franklin Duell, 82, of Traverse City, passed away peacefully on the morning of Nov. 23, 2019, with family at his side. Ray fought a long and courageous battle with cancer. While he is already deeply missed, we are grateful that... View Obituary & Service Information

The family of Raymond Franklin Duell created this Life Tributes page to make it easy to share your memories.