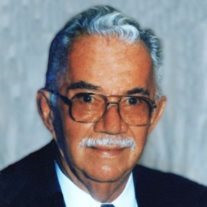 Heaven has added a new bass to the choir. Ray Hart left this world on Saturday March 22, 2014 at Munson Medical Center. He was surrounded by four generations of his family. He was born to Raymond Hart Sr. and Gladys ( Rinehart) Hart. Ray was married to Marie Lamb on June 15, 1951. Ray enjoyed life to the fullest and the most important things in his life were his wife Marie, his children, grand children, great-grand children and great-great grandchild. Ray served God thru his gift of music and sang in a quartet all over Northern Michigan. Ray was a licensed Master Plumber and Mechanical Contractor. He did plumbing on jobs from Marquette to West Branch. He learned the plumbing trade from his father Raymond Hart Sr. at William Hart & Sons Plumbing, one of the first plumbing shops in Traverse City. The last part of Ray's plumbing career he worked as an Estimator and Project Manager for Several Mechanical Contractors in Traverse City. Ray loved teaching the plumbing trade to his employees, and they always turned out to be his friends for life. Ray loved his wife and children beyond description. His willingness to work very long hours, anywhere in Michigan, showed his commitment to provide for his family. Every time he carne home, he brought them surprises. Ray had a gift of making the people around him feel good about themselves. Countless times in his life he could be heard telling someone "you are the greatest". Ray and Marie's house was always open for their family and he loved it when his grandkids and great grandkids were there for him to kid around with, tease, and adore. Ray was an outdoorsman of the truest sense. deer hunting, upland game hunting, fishing and boating were things he loved to do with friends and family. Ray and Marie made their home on Silver Lake in Traverse City for over 50 years and enjoyed boating and swimming with family and friends. Ray and Marie spent many of their winters in Florida during the last years of his life. He persevered through many illnesses and much pain, and in spite of that he always was very cheerful, and his faith in God, and his positive attitude should be something we all should strive for. Ray was preceded in death by his parents and a brother. He is survived by his loving wife Marie for 62 wonderful years of marriage, and his four children Diane (Lon) Kinney, Barbara (Don) Bates, Beverly (William) Thomas and Douglas (Michelle) Hart. 12 grandchildren, 28 great grandchildren, and 1 great-great grandchild, 5 step grandchildren, 7 step great-grandchildren, two sisters and several other family members. The family would like to offer a sincere Thank-you to the staff at Munson Medical Centers ICU Department, especially Casey and Mark for the their skilled and compassionate care. A celebration of Ray's life will take place on Thursday March 27, 2014 at The Reynolds-Jonkhoff Funeral Home. Visitation will begin at 1:00 followed by the service at 3:00 p.m. In lieu of flowers, please make a donation in his name to the charity of your choice. Please share your condolences as well as your favorite memories of Ray with his family by way of his online guest book at www.reynolds-jonkhoff.com. The family is being served by Reynolds-Jonkhoff Funeral Home.

Heaven has added a new bass to the choir. Ray Hart left this world on Saturday March 22, 2014 at Munson Medical Center. He was surrounded by four generations of his family. He was born to Raymond Hart Sr. and Gladys ( Rinehart) Hart. Ray was... View Obituary & Service Information

The family of Raymond Junior Hart created this Life Tributes page to make it easy to share your memories.

Heaven has added a new bass to the choir. Ray Hart left this...