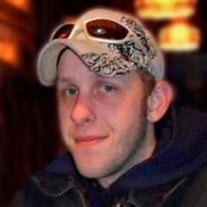 Raymond was born on July 31, 1986 in Traverse City Michigan to Rodney “Jerry” and Amy (Weber) Hulbert. He entered into eternal life on September 7,2021 at his home in Maple City Michigan. The young man that would do anything for anyone is still holding true to that with angel wings now. Raymond loved the outdoors if he wasn’t riding snowmobiles in the winter he was sighting in guns before hunting season. He enjoyed his time around the bon fire hanging with his best buds. His love and passion for the outdoors was noticed by all. Aside from the fact that his sister was a “Sparty” Raymond would cheer on the maze and blue and enjoy the friendly banter back and forth about the season. He was into loud trucks like most men and fast cars. He appreciated the friendship with his fur buddies and spoiled them all rotten. Raymond was an amazing father to his only son Isaiah. They were always having fun together whether it was riding bikes, building forts, throwing the football or him teaching his son how to ride a four-wheeler and how to shoot a gun. His son was his world and you knew it right away because not only did they act alike they looked like twins. Raymond loved his son more than anything in this world. Raymond will be missed by many but never forgotten as he will continue to live in the hearts of those he touched. Raymond is survived and missed dearly by one son Isaiah Farris of Interlochen. His loving parents Rodney “Jerry” and Amy (Weber) Hulbert Sr. of Maple City. One brother RJ Hulbert Jr also of Maple City. Two sisters Rebecca (Jason) Fountain of Kalkaska and RhoJo (Kevin) Crick of Suttons Bay. Three beautiful nieces Sierra Nagy, Chloe Crick and Montana Nagy. Three handsome nephews Payton Nagy, Tanner Crick and Mason Hulbert. Raymond is preceded in death by his paternal grandparents Raymond and Dela Hulbert, maternal grandparents James and Maureen Weber, several aunts and uncles and a few cousins. Raymond will be laid to rest at Rose Hill Cemetery on October 2,2021 at 2pm in Maple City. The family then invites you to join them for a small celebration of life luncheon located at the Kasson Center Township Hall in Maple City.

Raymond was born on July 31, 1986 in Traverse City Michigan to Rodney &#8220;Jerry&#8221; and Amy (Weber) Hulbert. He entered into eternal life on September 7,2021 at his home in Maple City Michigan. The young man that would do anything for... View Obituary & Service Information

The family of Raymond Hulbert created this Life Tributes page to make it easy to share your memories.