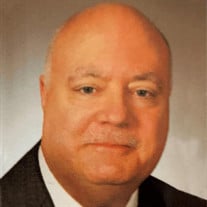 Raymond Hoyt Musser, 65, of Traverse City passed away Feb. 25, 2021. He was born in Flint, Jun. 17, 1955 to parents Elaine H. and Orlo M. Musser. Raymond attended Flint High School. As a teenager he and his lifelong friends Dennis, Dave, Shay, Nick and Ted worked for Metro Ambulance Company. He then earned his associate degree in Criminal Justice from U of M Flint. Later-on he would attend the Naval Post-Graduate School. He became a police officer, graduating first in his class. Following his career as a police officer he entered the security sector, first working in security management for General Dynamics Land Systems in Sterling Heights, MI. After September 11, 2001 he was promoted to Chief of Security for General Dynamics’ corporate headquarters in Washington D.C. In 2015 Raymond retired from General Dynamics as Vice president of Security. He and his wife Carol moved to Traverse City in 2015. He would go on to say that Traverse City was the only place he could truly relax. Raymond traveled internationally for work and made many close friends along the way. Even though he was retired he enjoyed consulting with several international companies. He loved food and cooking, as well as movies (especially the Godfather). Conversations with his sons were highlights, along with reading and keeping-up with Michigan sports teams. Raymond leaves behind his wife Carol (Watson) Musser of Traverse City; sons Matt of Mclean, VA and Mike of Garland, TX; brother-in-law Bob Treadwell; cousins Sue, Sandy and Sally and numerous nieces and nephews. He was preceded in death by his parents and sister Vivian Musser Treadwell. Mass of Christian Burial will be held 1:00 PM, Thursday, March 4, 2021 at St. Joseph Catholic Church in Traverse City. He will be laid to rest in the Evergreen Cemetery of Grand Blanc, MI, on Friday, March 5, 2021, at 1:00 PM for those wishing to attend the graveside service. In lieu of flowers please consider donations to Fisher House Foundation at www.fisherhouse.org or to St. Jude Children’s Research Hospital, www.stjude.org. Raymond’s tribute page may be viewed at www.reynolds-jonkhoff.com

The family of Raymond H Musser created this Life Tributes page to make it easy to share your memories.