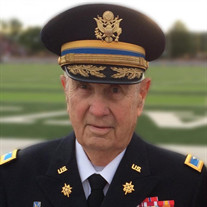 Col. (ret.) Lawrence George Clayton, United States Army, died on July 17, 2020. He was born in Saginaw, Michigan on February 27, 1936 to Lawrence and Adah (Whaley) Clayton. George attended Arthur Hill H.S. in Saginaw, where he participated in basketball, football, swim and dive team, and where his love of bird hunting began with his friends. He went on to graduate from Central Michigan College in 1958. In 1982, he would earn his Master’s degree from CMU. During his undergraduate studies at CMC, he was a member of Sigma Tau Gamma Fraternity and participated in the ROTC program, where he was commissioned as a Second Lieutenant. He was branched into the Army Intelligence community and proudly served in the armed forces for the next 30 years. In 1959, George married Marykae (Mickey) Powers Clayton, who he met at CMU. Shortly after he completed his training and obligations at Ft. Lewis in Washington state, they moved to Traverse City, Michigan and began teaching careers until George reported for active duty in Germany. It would remain his favorite tour of duty. He loved the language and continued to speak German phrases to anybody around him throughout his life, whether they understood the language or not! He was also fond of the culture and the food, and would return to Germany for leisure travel with his family several times over the years. In 1965, the Clayton family returned to the States to live in the Northern Virginia area. In 1966, George served a tour in Vietnam, returning in 1967. The family would remain in the Washington, D.C. area, with George working at the Pentagon and spending time at over 40 military bases, until George’s retirement. George would earn both the Bronze Star and the Meritorious Service Medal for his dedication and service. He graduated from the Army War College and the Command General Staff College. During his time with the Army Reserves, he served as the Commander of HQ Company, Commander of Company C, 10th Special Forces, and Commander of 428th MI DET (Strategic). After his retirement, he was honored by the Central Michigan University ROTC by being inducted into their Hall of Fame. During his civilian career, George worked for the Defense Intelligence Agency (DIA) as an intelligence analyst and participated in the Iranian Hostage Rescue Mission and Desert Shield/Storm. He retired in 1991. George and Mickey returned to Traverse City and enjoyed living on the bay. George loved being outdoors and playing golf. He also loved singing with the choir at First Congregational Church. He was an avid bowler, often competing in championship tournaments. Bird hunting remained a life-long passion. He was a member of the Ruffed Grouse Society and loved participating in field trials with his Brittney Spaniels and assisting with events in the organization. George continued to enjoy participating in two bridge clubs in the area, gathering to play weekly. He very much enjoyed the comradery and the game of bridge. George’s perfect day would be working with his Brittney’s on a crisp fall day, enjoying the colors, and watching the dogs flush grouse. Happy Heavenly Hunting Georgie! And Auf Wiedersehen! George is preceded in death by his parents; his sister, Carole McMahon Kindt; his brother in-law, David P. Powers. He is survived by his wife of 61 years, Marykae Powers Clayton; his children, Amy (Tawny Hammond) Clayton and Larry (Rebekah Martinek) Clayton; his brother in-law, Gilbert (Nancy) Powers; his niece, Carrie (Todd) Brown; his nephews, Charles (Mary Beth) McMahon, Andrew (Malyssa) McMahon, Shad (Xochitl Pena) Powers, and Ryan Powers; his 3 grand nephews and 7 grand nieces. And his grand dog, Rosie (aka Wagger). The family would like to thank the Munson Medical Community for the years of care provided, particularly to Dr. Angela Pohl for her patience, kindness, and professionalism. A Funeral Service honoring George will take place at 3:00 p.m., with visitation starting at 2:00 p.m., on Saturday, July 25, 2020 at the Reynolds-Jonkhoff Funeral Home, 305 Sixth St., Traverse City, Michigan 49684. Dr. Gary Hogue will officiate. Military Honors will be conducted under the auspices of the U.S. Army, Cherryland V.F.W. Post 2780 and American Legion Post 35. Memorial gifts honoring Col. Clayton’s memory may be made to: CMU ROTC Development Fund, c/o Alumni Relations, 524 E. Bellows St., Mt. Pleasant, MI 48858. Please feel free to share your thoughts and memories with George’s family at his tribute page at www.reynolds-jonkhoff.com. The family is being cared for by the Reynolds-Jonkhoff Funeral Home and Cremation Services.

The family of Col. (ret.) Lawrence George Clayton created this Life Tributes page to make it easy to share your memories.