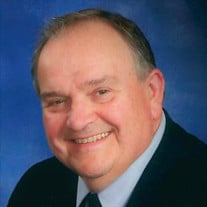 Rev. Daniel Lawrence Dockery, 73, entered his eternal home on Saturday, February 19, 2022. Dan was born January 26, 1949, to Anthony “Doc” and Marguerite Dockery and was baptized and confirmed at Trinity Lutheran Church, Traverse City, Michigan. He graduated from Traverse City Central High School in 1967 after which he attended Concordia Lutheran Teachers College, Ann Arbor, MI. After receiving his associates degree, he transferred to Concordia Teachers College, River Forest, Illinois. Following his graduation from Concordia he became a teacher and principal at Grace Lutheran School in Auburn, Michigan, and served that school until 1982. Dan married the love of his life, Lois (Dorn), in 1974 and they shared 47 extraordinary years together. In 1982 they moved back to Dan’s hometown of Traverse City. He became the Director of the Good Samaritan Housing Center and was instrumental in the establishment of the current Goodwill Inn. He earned a Master of Clinical Social Work degree from Michigan State University in 1987 and served as the clinical social worker at Birchwood, Tendercare, and Bortz nursing homes, as well as the administrator of Tendercare. In 1994 Dan returned to teaching at Trinity Lutheran School and later became the principal. He served Trinity until his retirement from teaching in 2015. Having had a lifelong desire to become an ordained pastor, in 2014 he entered Concordia Theological Seminary in Ft. Wayne, Indiana, and then became the pastor of Bethlehem Lutheran Church, Glen Arbor, MI. Dan served Bethlehem until his retirement in 2021. Dan’s love of teaching and preaching significantly touched the lives of countless children and adults alike. He will be long remembered for his love of history and his hands-on approach to education. His moto in life was to always keep on learning and experiencing new things. Dan is survived by his wife, Lois; his sister-in-law Mary Jane Dockery of Traverse City; sister-in-law Rachel Krause of Beatrice, Nebraska; nephew David (Ali) Dockery and their daughter, Lily, of Sparta, New Jersey; and niece Brenda (Michael) Arden of Alachua, Florida. Dan was preceded in death by his parents and his brother, Donald. Funeral services will be held at Trinity Lutheran Church on Friday, February 25, at 11:00 AM. Visitation will begin at 10:00 AM and continue until the time of service. Interment will take place at a later date in Grand Traverse Memorial Gardens. Memorial contributions may be given to Mackinac Associates, Bethlehem Lutheran Church of Glen Arbor, or Trinity Lutheran School. Lois and the family are being cared for by Reynolds-Jonkhoff Funeral Home and Cremation Services. Memories and condolences may be shared on Dan’s tribute page, www.reynolds-jonkhoff.com

The family of Rev. Daniel L. Dockery created this Life Tributes page to make it easy to share your memories.