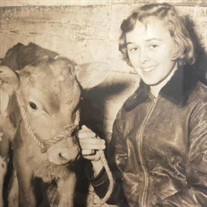 Ritter, Rhoda Mae (Lightfoot, Farrell) Traverse City, MI -Rhoda M Ritter left behind her aging, aching body, on March 3, 2020, after suffering a heart attack and then battling pneumonia. Her daughter Pat and sister Midge were at her side, with many other family members and friends sending her thoughts of love and strength. Rhoda lived the life she wanted and passed away on her terms. Born on March 18, 1936, to Byron and Nina (Cease) Lightfoot, in Harbor Springs, MI, Rhoda was the oldest of 5 children. She grew up on the family dairy farm, tromping around outside with her father, consciously avoiding housework as much as she could. It was a habit she would practice throughout her life. After relentless begging, her parents bought her a saddle horse (they had draft horses) when she was 12. There was no one better suited for life atop a horse than Rhoda. Horses were central to her existence from that first one to the last ones, in her barn on the day she died. In between, she did all she could to learn about them, and teach others how to care for, ride and love these beautiful, sensitive creatures. Her childhood friends were the first recipients of her knowledge, then her children, adult friends, horse boarder customers, 4-H club members, riding day-camp kids, readers of her newsletters and book, attendees of her horse husbandry class at NMC, grandchildren, great-grandchildren and most likely those unlucky enough to be standing next to her in the grocery line. Rhoda never wanted wealth; she wanted to make the world a better place for horses and those that loved them. In 1954, Rhoda married Robert Farrell. They had four children. In 1971, she married Roger Ritter. Roger and Rhoda boarded horses and bred Arabian horses at 2 locations in the Traverse City area. In an effort to explore the world of competitive trail riding, Rhoda trained for and attended many sponsored rides in the Midwest, winning many awards and organizing the first multi-day endurance trail ride east of the Mississippi, the 5 day Shore to Shore Ride, that used the cross Michigan Riding and Hiking Trail (the Blue Trail) as the route. As a member of the Michigan Trail Riders Association, she also crossed the state on the trail recreationally many times, always with friends and/or family in tow. Trail riding was her sport. If you wanted to spend time with her, you learned to love it too. As a horse breeder and educator, Rhoda felt a responsibility for horses she bred, raised and sold, and all horses in general. In the late 70’s and early 80’s, she and a team of like-minded people, rescued several starving horses, with no thought to their own safety. She dubbed the group the Voice of the Horse. Eventually, she stopped breeding horses because she believed that there were too many horses in the world if people couldn’t or wouldn’t care for them. In 2006, Rhoda and Roger moved to Prospect, Oregon, in an effort to find more adventures and live near daughter Lissa. Several years later, they moved back to Michigan and settled in Grand Traverse County again because they had so many friends in the area. Rhoda had a stroke in 2015 which slowed her down a bit and made her more dependent on others, something she hated. However, she was able to still take care of her horses twice a day for most of the remainder of her life. Rhoda is survived by her husband Roger, children Lissa Farrell, Patricia (Gary Gruber) Farrell, Mike (Lydia) Farrell and Jeff Farrell, grandchildren Hunter (Laura) Dorn, Dana Gruber, Elizabeth (Neil) Farrell Heller, Skyler Dorn and Brittany Gruber, and 3 (soon to be 4) great-grandchildren. She is further survived by her sisters Imelda (Jerry) Hofbauer and Marilyn aka Midge (Robert) Truman, special friends Don and Doris Edwards, David Vanderlyn and her cat Sassy. The family would like to thank the nursing staff at Munson Medical Center Cardiology ICU for the excellent care that Rhoda received during her last illness, as well as her PCP Dr Angela Pohl and the Partners In Health clinic, who always treated her with respect and compassion. A private life celebration will be held this summer. Rhoda’s ashes will be spread on land near Harbor Springs, in a poplar grove that is carpeted with trilliums in the spring. If you’d like to honor her, hug your pets and send a donation to an animal charity of your choice. One that helped out the family during Rhoda’s hospitalization is horsenorthrescue.org. Here is a summary of her spirit, in her own words, taken from the Author’s Message section of her book Shore to Shore on the Michigan Riding and Hiking Trail: “There is just something about sitting on a fine horse, with the flickering leaves protecting me from the harsh elements of the weather, going at a pace so slow and quiet I can sneak up on all kinds of wildlife in their natural surroundings, that is so good for the soul, the reasons for returning to the everyday ways of life are forgotten.” Mom never met a roadblock she couldn’t get past and she taught her kids and grandkids to be the same way. She thought nothing of blazing a trail if one didn’t exist or, if the existing one could be made shorter, finding that shortcut. She really lived.

Ritter, Rhoda Mae (Lightfoot, Farrell) Traverse City, MI -Rhoda M Ritter left behind her aging, aching body, on March 3, 2020, after suffering a heart attack and then battling pneumonia. Her daughter Pat and sister Midge were at her side, with... View Obituary & Service Information

The family of Rhoda Mae Ritter created this Life Tributes page to make it easy to share your memories.