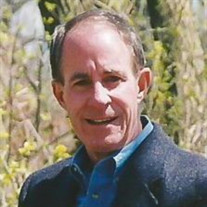 Richard William Cobb passed away at Munson Hospital after suffering a stroke on July 13, 2020. Rich was born in 1947 in Syracuse, New York to June (Thorn) and Gilbert Cobb. Rich spent his early years with his older sister, Judy and his parents in upstate New York near his mother’s family. In the mid-fifties, his family moved to the Detroit area and eventually settled in Ann Arbor where he started third grade at Haisley Elementary School. After graduating from Pioneer High School in 1965, he attended community college, until his draft number came up in 1967, and he was inducted into the Army. His tour of duty included 13 months in Vietnam where he served as a personnel clerk. When he returned, he enrolled at Michigan State University and completed a degree in Communications. Rich moved to Chicago after college and worked in advertising sales for magazines for the rest of his career. He started in the good old days where extensive travel and expense accounts were the norm, and he loved every minute. Over the years, he sold space for the Wall Street Journal, New Yorker, Newsweek, and several trade publications. After getting established, he bought a condo in a six-floor walk up building on the north side of the city where he spent countless hours removing old paint and fixing the place up. His father was a master handy man and Rich followed in his footsteps. All that travel he did for work finally paid off, when he met his future wife, Marilyn, in Vail, Colorado in 1984. He was in town visiting a close friend from Chicago who owned a ski condo. The friend had a cousin who was Marilyn’s close friend and so they conspired to introduce the two. Rich charmed Marilyn immediately with his well-known wit and charm. They had a long distance relationship with lots of phone calls and plane trips for a year, before Marilyn left the mountains and moved to Chicago where they were married in September 1985. Making the transition to the big city was tough for Marilyn, but with Rich’s guidance and friends, she learned to love it. After a few years, they moved to Lake Forest and bought a home with a fenced in yard for their Westies. They lived there for 20 years with a few more beloved dogs and many good memories. Because Marilyn was from Michigan, too, they always planned to retire up here, and in 2000 built a home near Torch Lake. That process was one of the highlights of Rich’s life and moving there in 2007 was a dream come true. When he wasn’t busy with a project, he was in his favorite easy chair reading yet another thriller from the Elk Rapids District Library. Taking road trips all over the country became an annual ritual, as he and Marilyn explored places from the Adirondacks to Santa Fe. Rich was also very active in the Paradise Estates Association, serving as treasurer and general watchdog for several years. Rich’s health deteriorated in the last few years so he and Marilyn moved to Traverse City a year ago. Rich is survived by his wife, Marilyn; sister, Judy (Cobb) Shuck and David of St. George, UT; sister-in-law, Peggy (McMullen) Reeder and Gene of Georgetown, TX; brother-in-law, Donald Ballenger of Gaylord, and many nieces and nephews. Cremation has taken place, and there will be no services at this time because of the pandemic. Marilyn would like to thank Rich’s doctors, the Munson and Cowell Cancer Center staff and EMTs who kindly cared for Rich through his health struggles over the last nine years. Donations can be sent to: Elk Rapids District Library Capital Campaign, P.O. Box 337, Elk Rapids, MI 49629 or Cherryland Humane Society, 1750 Ahlberg Rd. Traverse City, MI 49696. Please feel free to share your thoughts and memories with Rich’s family at his tribute page at www.reynolds-jonkhoff.com. Rich and his family are in the care of the Reynolds-Jonkhoff Funeral Home and Cremation Services.

Richard William Cobb passed away at Munson Hospital after suffering a stroke on July 13, 2020. Rich was born in 1947 in Syracuse, New York to June (Thorn) and Gilbert Cobb. Rich spent his early years with his older sister, Judy and his... View Obituary & Service Information

The family of Richard W. Cobb created this Life Tributes page to make it easy to share your memories.

Richard William Cobb passed away at Munson Hospital after suffering...