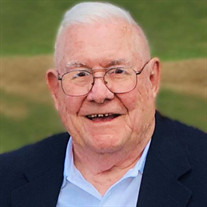 Richard Alvin Crandall passed away peacefully Saturday, November 14, 2020 at the age of 98. Born on July 5, 1922 in Aurora, Indiana to Floyd and Barbara Crandall, he spent his early childhood here before the family moved to Toledo, Ohio. Richard, known as “Rich’ to his family, was preceded in death by his, parents and three brothers, Robert, Ralph and Chuck Crandall, and his sister, Audrey, and survived by two sisters Lois and Barbara. Richard graduated from high school in 1939 and attended Purdue University to study horticulture, where he joined ROTC. In 1944, he was drafted into the Army where he gained the rank of sergeant and served in France and Belgium as a medic. Honorably discharged after the war, he returned to Purdue University and graduated in 1946 with a BA in Horticulture. Richard “Dick” Crandall was hired at Dow Chemical in St. Louis, Missouri after graduation. It was here he met Lyn Stork and was married on September 1, 1951. Dick and Lyn had two sons, Robert and William and spent most of his working career in Kansas City, Kansas as a salesman for Dow. After retirement from Dow in 1983, Dick continued to work part-time in Kansas City. Dick and Lyn moved to Traverse City, Michigan, to be closer to grandchildren, where he spent many years working for Chateau Grand Traverse tending the flower beds until the age of 90 when he thought he should ‘take it easy’ now. Married for 68 years, Dick is preceded in death by his wife Lyn. Dick is survived by his sons, Robert and Kris Crandall of Kerrville, TX and William and Cindy Crandall of Traverse City, MI. Dick is survived by five grandchildren and five great-grandchildren; Tyler, Shelia, and Phoenix Crandall of Houston, TX, Ashley, Nick, Calvin and Sabrina Darga of Traverse City, MI, Alex, Hedai, Catherine and David Horak of Newark, NJ, Jordan and Ethan Crandall of Fairfax, VA, and Brooke Crandall of Brighton, MI. Because of the current issues, a time to celebrate Dick’s life will take place at a later date with a family service. For a lasting memorial, the family suggests that Dick be remembered through a donation to the VFW in Traverse City, MI. Please share your memories and thoughts with Dick’s family by visiting his online tribute page found at www.reynolds-jonkhoff.com. The family is being cared for by Reynolds-Jonkhoff Funeral Home and Cremation Services, Traverse City.

Richard Alvin Crandall passed away peacefully Saturday, November 14, 2020 at the age of 98. Born on July 5, 1922 in Aurora, Indiana to Floyd and Barbara Crandall, he spent his early childhood here before the family moved to Toledo, Ohio. Richard,... View Obituary & Service Information

The family of Richard A. Crandall created this Life Tributes page to make it easy to share your memories.