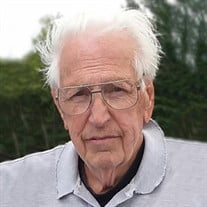 Richard "Dick" Culver, 88, of Traverse City, formerly of Lansing, completed his earthly journey Saturday October 23, 2021 with his loving companion Teresa and two amazing sons Kyle and Steven by his side. Dick was born on February 26, 1933 to the late Le Roy and Hope (Atkins) Culver. He was one of two children, whom he now joins in a holy reunion with sister Constance who preceded his death by only weeks. Dick was a longtime member of Christ The King Church of Acme. He instilled the importance to his family to have a solid relationship with God. That and of course making sure you never left home without a hundred dollar bill in your pocket for the "just in case" moments. He was quick witted, generous almost to a fault and was the social butterfly of most gatherings. Although his humor was dry, there was never a time that you didn't walk away chuckling after spending time with him. He hated the winters, loved golf, could cook a meal fine enough for a king and often took his close to OCD issues with lines and organization to a whole new level in his garden, his house and even the family cottage on Island Lake. After departing from the Army in 1955 where he honorably served our Country, Dick went on to complete his education at GMI. He began his time at work with his dad at the Roy Culver Motors Dealership in Indiana. This was his first taste of strong work ethics and values that his dad instilled in him. He went on to work with his brother-in-law Pat Moynahan with Stereophoto. His photography and aerial time all in one alongside a great man and friend. He would later find himself professionally employed by the State of Michigan as a Cartographer. Likely the reason that his gardens and trim molding were always so precise. Some would have called it a pipe dream, but for Dick when his mind was set it was done. Hence the ownership beginning in 1976 of his bar, the Hill Top Tavern in Park Lake, MI. It was the local person's dream hang out and was certainly a favorite for all the family and friends that shared a spirit, a story and eventually an amazing memory from the quaint tavern. He was a lifetime member of the Elks Club in Elkhart, IN, a supporting member of the USGA and many other charities and non profit groups that he gave freely to. He enjoyed watching football and golf, but above all, his greatest joys were golfing and fishing with his boys. Left to celebrate and live on with his legacy are; his companion of 22 years Teresa Wasson, and sons Kyle (Julia) and Steven. He now reunites with his parents and sister. Visitation will take place Friday October 29, 2021 at the Reynolds Jonkhoff Funeral Home from 4-5pm. The rosary will be prayed at 5:00pm with a funeral service immediately following. Dick's final resting place will be DeepDale Cemetery in Lansing. Those wishing an expression of sympathy are encouraged to find a way in Dick's honor to "pay it forward". For Dick it was about how to positively impact the today's and tomorrow's of humanity.

Richard "Dick" Culver, 88, of Traverse City, formerly of Lansing, completed his earthly journey Saturday October 23, 2021 with his loving companion Teresa and two amazing sons Kyle and Steven by his side. Dick was born on February 26, 1933... View Obituary & Service Information

The family of Richard "Dick" Culver created this Life Tributes page to make it easy to share your memories.