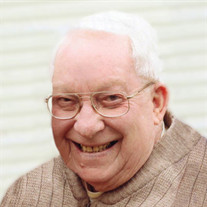 TRAVERSE CITY - Richard E. “Dick” Dancer, 85, passed away on Friday, August 14, at his home in Traverse City. Born July 4, 1930 in Toledo, Ohio, the son of the late Lloyd R. Dancer and Margaret (LaFountaine) Dancer, he was predeceased by his wife, Cynthia (Goffin) Dancer. Dick received his Bachelor’s Degree from the University of Toledo, and served honorably in the U.S. Army during the Korean War. In 1973, he co-founded Northwestern Michigan’s first residential half-way house in Traverse City, which is still a viable community resource. In 1974, he went to Flint, Michigan to intern in alcoholism therapy at Hurley Medical Center, after which he served a two-year residency at Hurley/Insight, and was Director of Alcohol Therapy units at Flint General and St. Joseph Hospitals. In 1979, he moved to Jacksonville, Florida, where he directed the City of Jacksonville’s Residential Alcoholism Rehabilitation Program. He and Cynthia established the Awareness Center, an out-patient free-standing facility, and a non-profit Florida corporation, Dancer & Associates, Inc., which contracted with the U.S. Navy’s “Navy Alcohol Safety Action Program” to provide administrative and clinical screening and education at Cecil Field Naval Air Station. During this time, he attended the University of North Florida, receiving a Master of Science degree in Allied Health Services. There he created and conducted a course/workshop “Alcoholism: A Nursing Dilemma” for nurses attending UNF’s School of Nursing as an adjunct to the faculty. In 1982, he was invited to become Director of Outpatient and After-Care Services at the prestigious Palm Beach Institute in West Palm Beach, Florida. Subsequently, he re- opened the Awareness Center and contracted with psychiatrists and psychologists to provide individual, family and group therapies, medical and psychological assessments, education and programming, after-care, alcoholism counselor training and continuing educational credits for dependency/co-dependency lectures at surrounding hospital locations. Dick was a Certified Social Worker in Michigan (the 17th person in Michigan to be conferred as a Certified Alcoholism Counselor). In Florida, he had state, national and international certifications as an Alcohol and Drug Abuse Counselor and as a Certified Addictions Professional. Following the death of his wife, Cynthia, in 2011, he returned to Traverse City, where he volunteered his services to various individuals and non-profit organizations as a continuation of his forty year crusade to help victims of the disease of alcoholism addiction. He is survived by sons, John E. Dancer (Barbara) and Mark R. Dancer (Nan), of Traverse City, and four grandchildren: Evan Dancer, Rebecca Dancer, Drew Dancer and Jessica Dancer. He is also survived by his deceased wife’s daughter-in law, Tone’ Goffin and granddaughters, Katinka and Kassandra Goffin, as well as former wife and life-long friend, Jane Strauser, and dear friend Mary Ann Force. A memorial service will be held at the Unitarian Universalist Congregation of Grand Traverse at 2:00 pm on Sunday, August 30, 2015 with visitation beginning one hour before the service. Memorial contributions in Dick's name may be directed to Women's Resource Center 720 S. Elmwood Ave. #2 Traverse City, MI. 49684, Unitarian Universal Congregational of Grand Traverse, 6726 Center Rd. Traverse City, MI. 49586, or charity of one's choice. Kindly share your thoughts and memories with Dick’s family by way of his online guestbook at www.reynolds-jonkhoff.com. The family is being cared for by Reynolds-Jonkhoff Funeral Home and cremation services.

The family of Richard Edwin Dancer created this Life Tributes page to make it easy to share your memories.