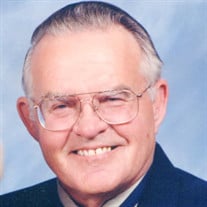 Richard “Dick” Arthur Daniel, of Empire, passed away on Saturday, January 31, 2015 at Munson Medical Center in Traverse City. Richard was born May 31, 1937, in Fort Benning, GA, to the late Samuel and Ruth (Thurman) Daniel. He will be remembered for his quiet strength, and his dependability. He was a source of wisdom and advice for many people. He appreciated small everyday joys. He loved to laugh, and he loved life. His life exemplified the West Point model of “Duty, Honor and Country”. He married the love of his life, Jeanette Bedson, on August 4, 1960 in Royal Oak, MI. The couple had two daughters and celebrated 54 years of marriage together. Richard graduated from the West Point Military Academy in 1960 with a BS in Engineering. He served 23 years in the U.S. Army and retired in 1983 as a Lieutenant Colonel. During his service, he served as a procurement management officer, artillery officer, and research and development coordinator. He served two tours in Vietnam. His overseas assignments included three years in Germany and four years in Amman, Jordan. Following his military service he was employed by General Dynamics in Warren Michigan for nine years as an Engineering supervisor for the Land Systems Division. After moving to Empire, he enjoyed golfing at the Dunes and working in the pro shop part time. Richard enjoyed an active membership in the Empire Lions Club where he served as governor for district 11-E1. He has also been an active member of the Empire United Methodist Church where he enjoyed singing in the choir and serving as the church treasurer. He loved music and sang in the choir of every church he attended throughout his military career. Fishing and gardening have always been a source of joy for him. He sincerely loved spending time with his grandchildren and family. Richard is survived by his wife Jeanette, his daughters, Deborah (Michael) Husak and Kathryn (Brian) Utter, and his grandchildren Daniel, Charlie, Alexander, and Laura. His memorial service will be held at Empire Methodist Church on Saturday, February 7, 2015, at 11:00am with visitation one hour prior. His family requests that, in lieu of flowers, contributions can be made to the Empire Lions Club or the Cowell Family Cancer Center at Munson Medical Center. Kindly share your thoughts and memories with Dick’s family by way of his online guest book at www.reynolds-jonkhoff.com. Arrangements for the family have been entrusted to Reynolds-Jonkhoff Funeral Home.

The family of Richard Arthur Daniel created this Life Tributes page to make it easy to share your memories.

Richard “Dick” Arthur Daniel, of Empire, passed away on Saturday,...