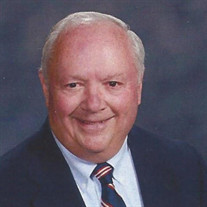 Richard “Dick” Budinger passed away gracefully on April 27, 2022. He is loved, missed, and survived by his wife of over 61 years, Gay (Mercer); his three children and their spouses, Cindy & Russ Daniel, Rick & Tammi Budinger, and Virginia & Eric Krueger; and six grandchildren, Larry (Kendall), John, Cathy, Ricky, Barrett, and Lissa. Dick was born the youngest of four boys in Bronxville, NY and attended the College of the Holy Cross in Worcester Massachusetts on a Navy scholarship where he was student leader and soloist in the Glee Club and a barbershop quartet. He served honorably as a gunnery officer on a destroyer before retiring and entering the private sector. He was passionate and creative in his professional career. Dick and Gay lived for many years in Grosse Pointe, Michigan where he began his career as an investment banker and moved on to the Treasurer’s Office at General Motors, followed by Midwest Advance Computers, ultimately leading to his development and co-ownership of cable television companies representing franchises in several markets around the United States. Dick and Gay moved from Grosse Pointe to Glen Lake where he then served five years as an administrator and father figure at the Leelanau School, and owner/operator of the Traverse City Tall Ship Company. Dick served as commodore of the Glen Lake Yacht Club, president of the Traverse Symphony Orchestra, president of Noontiders, trustee at the Leelanau School, president of the Glen Lake Association, and chairman of the finance council at St Philip Neri Church where he also performed frequently as a Lector, Eucharistic Minister, and Cantor. In his free time, Dick loved golfing, hunting, and walking the beaches of Boca Grande. Dick was devout in his faith and loyal and kind in his love of family and friends. He approached life with patience and good humor. In his passing, the choir of angels in heaven gained a beautiful voice, and his family cherishes the memories of a life well-lived. Dick was predeceased by his parents John M. and Mary Alice (Merrill) Budinger, and brothers John, David, and Daniel. Mass of Christian Burial, Monday, May 2, 11:00 AM, at St. Philip Neri Catholic Church of Empire. Visitation one hour prior to Mass. In lieu of flowers, donations can be made in Dick’s memory to the Leelanau School or St. Philip Neri Church in Empire, MI. Reynolds-Jonkhoff Funeral Home and Cremation Services is caring for Dick and his family, www.reynolds-jonkhoff.com

Richard &#8220;Dick&#8221; Budinger passed away gracefully on April 27, 2022. He is loved, missed, and survived by his wife of over 61 years, Gay (Mercer); his three children and their spouses, Cindy & Russ Daniel, Rick & Tammi Budinger, and... View Obituary & Service Information

The family of Richard "Dick" William Budinger created this Life Tributes page to make it easy to share your memories.