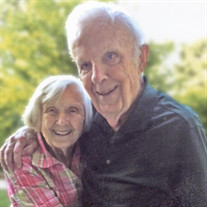 Traverse City - Dick Coleman, age 90, passed away on Sunday, July 12, 2020. Dick was born December 24, 1929, in Milwaukee, Wisconsin. He is the son of Joseph and Catherine (née Brennan) Coleman. Dick has been a resident of Traverse City since 1988. He and his wife, Betty, lived most of their years in Traverse City on Old Mission Peninsula. They joined the Glen Eagle Retirement Community in 2014, where they were well-cared for and lived in good cheer. Dick graduated from Lourdes High School, Rochester, Minnesota, in 1948. Afterward, he attended Loras College before finishing his education at the University of Minnesota with a bachelor’s degree in engineering. Dick was initially employed by the Maytag Corporation in Newton, Iowa. A few months afterward, he was drafted into the Army and was based in El Paso, Texas. He was later employed by AC Delco in Milwaukee/Oak Creek, Wisconsin. He completed his career at the General Motors Technical Center in Warren, Michigan from 1972 until his retirement in 1986. Dick and Betty (née Koopman) were married on May 1, 1954. They enjoyed 66 rich and loving years together. They made a warm home that served as a place for big family gatherings in the summer and on holidays. Dick was curious about the world around him, loved to learn, and valued education. He was extremely resilient in facing life’s challenges, generous in spirit, and conservative in action. He loved the outdoors, walking, playing golf, being with his grandchildren, rooting for the Green Bay Packers and traveling many interesting places in the world with his wife. After 66 years of sharing life's joys he was followed in death 5 days later by his wife, Betty Coleman. Dick is preceded in death by his sister, Jane Thomas, sister in law Sandi Coleman and daughter, Mary Elizabeth Coleman. He is also survived by his brothers John (Pam) and James (Lili); brother-in-law Thomas Thomas; his sons Kevin (Julie), Michael (Michelle), Thomas (Janice), and Daniel (Bridget); and grandchildren David, Alan, Carolyn, Sarah, Eric, Matthew, Joseph, Elizabeth, Lauren, Mary, and Liam. Services for Dick and Betty will be held on Friday, July 31st, 2020. A private rosary service will begin at 10:00 a.m. followed by eulogies of Dick and Betty and may be viewed online at rjfh.tv. The family will receive friends from 10:30 a.m. to 12:30 p.m. at the Reynolds-Jonkhoff Funeral Home (305 Sixth St., Traverse City). A funeral mass will be held immediately afterward at 1 p.m. at St. Francis of Assisi Catholic Church. Fr. Don Geyman will celebrate the mass. For those unable to attend the mass will be broadcast at sfparish.org beginning at 12:55 p.m.. Follow the Facebook link. Please observe and respect current health and safety guidelines, facemasks will be required. In lieu of flowers, memorial contributions may be directed to the Interlochen Arts Academy or the BrightFocus Foundation Macular Degeneration Fund. Dick and Betty will be laid to rest at St. Joseph Catholic Cemetery, Old Mission Peninsula, at a later date. Dick will also receive military honors at that time. Share a memory of Dick and Betty at www.reynolds-jonkhoff.com Arrangements with the Reynolds-Jonkhoff Funeral Home and Cremation Services.

Traverse City - Dick Coleman, age 90, passed away on Sunday, July 12, 2020. Dick was born December 24, 1929, in Milwaukee, Wisconsin. He is the son of Joseph and Catherine (née Brennan) Coleman. Dick has been a resident of Traverse City since... View Obituary & Service Information

The family of Richard "Dick" Joseph Coleman created this Life Tributes page to make it easy to share your memories.