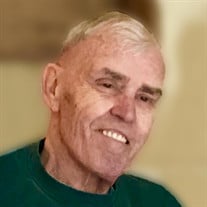 Richard Ervin Fulkerson ,85, passed away peacefully at The French Manor in Traverse City, MI on August 31st. Dick was born in Monroe, Michigan in 1932 to Alice and Ervin Fulkerson. A graduate of Monroe high school, he was named to the All State basketball team his senior year and went on to play a year for the University Of Michigan Wolverines. He was a passionate educator, coach and always outspoken on the social justice issues of his day. He graduated from Central Michigan University in 1954 and then completed his military service with the US Army. He married Patricia Ann Meier in Mt Pleasant, Mi in 1956 and went on to earn his Master’s degree in school administration from the University of Michigan. He taught social studies at Albion and Grand Haven high schools where he helped coach football and basketball. In 1968, he was named head of the Humanities division at Interlochen Arts Academy in Interlochen, Mi. During his years at IAA, he led student groups on work study programs to the Apache and Papago Indian Reservations in Arizona. He was named an honorary member of the Papago Indian tribe by the Bureau of Indian Affairs for his tribal advocacy work in Arizona. In 1971 ,he and his family moved to Raleigh, NC where he was appointed Director of the Upper School and assistant to the President at Ravenscroft school. He returned to Traverse City, Michigan in 1979 where he held a leadership and teaching position at Rainbow High. He went on to become Director of Adult Education for the Traverse City and Kingsley school districts until he retired in 1994. He is survived by his wife and partner of 61 years, Patricia Meier Fulkerson, daughter Jan (Barlow) of Petoskey, son in law Jay Barlow of Raleigh NC, son Doug (Beth) of Traverse City, sisters Doris (Eberlein) of Wausau Wi, Ruth Ann (Gehlmann) of Ashland Oregon, brother in law Henry Gehlmann (with whom he shared many trips and adventures) and his loving nieces and nephews. He took great joy in his grandchildren, Miriam (Jon) of Flagstaff Az, Ashley( Rob) of Traverse City, Jordan ( Kiersten ) of Raleigh NC, Emily (Phil) of Hampstead England, Caroline (Barlow) of Petoskey, Mi, Jon Michael (Barlow) of Marquette Mi, and his 7 great- grandchildren. His two best buddies were Dick Parks and Carl Scheffer who together shared over 50 years of loyal friendship. The family would like to extend special gratitude to neighbors Bill and Linda Valleau, Dr. Bradley Goodwin MD and Munson hospice for their exceptional support, compassion and care. Friends and family are invited to gather at the Fulkerson residence on Saturday September 2nd from 2-4. A memorial is being planned for December when the family can all be together. The family is being cared for by the Reynolds Jokhoff Funeral Home and Cremation Services.

Richard Ervin Fulkerson ,85, passed away peacefully at The French Manor in Traverse City, MI on August 31st. Dick was born in Monroe, Michigan in 1932 to Alice and Ervin Fulkerson. A graduate of Monroe high school, he was named to the All State... View Obituary & Service Information

The family of Richard Fulkerson created this Life Tributes page to make it easy to share your memories.

Richard Ervin Fulkerson ,85, passed away peacefully at The French...