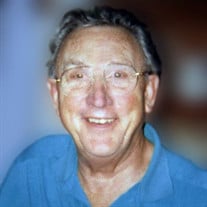 Richard John Gerling, 89, of Gaylord, Michigan passed away peacefully on Tuesday, October 13, 2015 at Traverse Manor. Dick was born on November 6, 1925 in Detroit, Michigan to the late Andrew and Elizabeth Ann Gerling. He married Joan Zaremba on August 8, 1947, in Detroit. Dick proudly served his country in the U.S. Army during World War II. He had been employed by Chrysler Motor Company until his retirement, after 33 years of service. After retiring Dick and Joan moved to their home on Lake Manuka in Gaylord. For many years they spent their winters in Florida. Above all Dick loved spending time with his wife. Dick is survived by his loving wife of 68 years, Joan, three sons; Christopher (Jennifer) Gerling of Traverse City, Terry (Kathy) Gerling of Summerville, SC and Rob (Betsy) Gerling of Mount Clemens, MI, 13 grandchildren and 8 great-grandchildren. Also surviving are a sister, Irene (Maurice) Vichon and a brother, John Gerling as well as many nieces and nephews. Dick was preceded by a son, Richard “Bud” Gerling of South Haven, two brothers and two sisters; Andrew Gerling, Leo Gerling, Marie Banner and Bridgette Rieger. A memorial service honoring Richard will take place at 3:00 p.m. on Monday, October 19, 2015 at the Reynolds-Jonkhoff Funeral Home, 305 Sixth St., Traverse City, MI 49684, with visiting one hour prior. Deacon Rene Hoenscheid will officiate. Those planning an expression of sympathy may wish to consider a memorial donation to Hospice of Michigan. Please feel free to share your thoughts and memories with Richard’s family at www.reynolds-jonkhoff.com. The family is being cared for by the Reynolds-Jonkhoff Funeral Home and Cremation Services.

The family of Richard J. Gerling created this Life Tributes page to make it easy to share your memories.