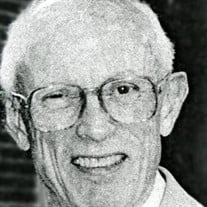 Dr. Richard J. Kratochvil, age 92, died at sunrise August 18, 2019, at the countryside home of of his daughter, Nancy. A fourth generation Traverse City Kratochvil, he was born August 16, 1927 to Julius and Ellen (Courtade) Kratochvil. He was a well respected veterinarian, and beloved by his family, friends and community. After graduating from Traverse City Central High School, he enlisted in the US Army Air Corps, serving with the Fifth Air Force in the South Pacific. After military service, Dick attended the University of Wisconsin, South Dakota State College, and graduated from Michigan State College of Veterinary Medicine in 1952. In 1952, he co-established Grand Traverse Veterinary Hospital, a certified American Animal Hospital Association clinic. He was a lifelong member of the Michigan Veterinary Medical Association, where he served on the Ethics Committee from 1964-1968. After his retirement, Dick thoroughly enjoyed his part-time position at Cherrybend Animal Hospital, working with his former mentee and good friend, Dr. Dan Aja. Dick is survived by his loving wife of 66 years, Jean (Taylor) Kratochvil, and his daughters: Ann (Tom) Post, Sue (Bernie) Moritz, Carol Kratochvil, Nancy Hogue, Marie (Jim) Petges. He is survived by grandchildren: Benjamin (Liz),Michael (Arielle) , Natalie (Bobby), Evan, Katie, Peter, Shannae, Marcus, Jenny, Tony, Rachel, Kyle and Christopher, and great- grandchildren: James, Perla, Frances, Lucille, and Davis. He is also survived by his sisters: Eileen Milner, Clara (George) McManus, Luella Wilson, Naomi (Jerry) Benton, sister-in-law Janet Chouinard, and former sons-in-law Jim Davis and Jeremy Hogue. Dick was predeceased by his parents, brother Charles, brothers-in-law Robert Milner and Abbot Wilson, and grandson, Marquice Hogue. Dick was a member of Christ the King Catholic Church, serving as an usher and Eucharistic Minister. He also served on the Building Committee for St Francis High School, as a charter member of the Board of Education of Grand Traverse Area Catholic Schools and as a board member of Northwestern Michigan College Campus Ministry. He was brilliant, kind, witty and generous, a lifelong learner, avid reader, devoted family man and animal lover. He enjoyed tennis, golf, fishing, reading, sudoku, and discussing politics. The family is incredibly grateful to Hospice of Michigan for their loving care of Dick and his family over the past four months. Donations may be made in Dick’s name to Cherryland Humane Society, Father Fred Foundation, or the Juvenile Diabetes Research Foundation. In honor of Dr. Kratochvil’s lifelong devotion to animals, the family would be pleased if you brought your pets to the visitation on Friday, August 23rd, from 4-7 pm, at Reynolds Jonkhoff Funeral Home. There will be a rosary at 7pm. The funeral will be held at Reynolds Jonkhoff Funeral Home on Saturday, August 24th, at 10am, with Gary Hogue officiating. There will be a visitation preceding the funeral from 9-10am.

Dr. Richard J. Kratochvil, age 92, died at sunrise August 18, 2019, at the countryside home of of his daughter, Nancy. A fourth generation Traverse City Kratochvil, he was born August 16, 1927 to Julius and Ellen (Courtade) Kratochvil. He was... View Obituary & Service Information

The family of Dr. Richard J. Kratochvil D.V.M. created this Life Tributes page to make it easy to share your memories.