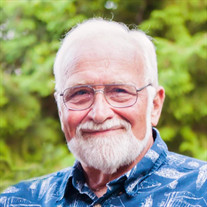 Richard (Dick) Addison Moses passed away at the age of 72, on August 18, 2021, at Munson Medical Center in Traverse City. He was born in Pontiac, Michigan to Evelyn (Mann) and Raymond W. Moses, grew up in Southfield, Michigan and graduated from Michigan State University. In 1972, Dick married Sharon Kennedy in Traverse City, and together they raised a daughter of whom he was infinitely proud. For thirty years he was employed by Ford Motor Co. at district offices in Milwaukee and St. Louis and at corporate locations in Dearborn and Detroit. Upon retiring to Traverse City, he spent the majority of time at his beloved Thimble Cottage on Bass Lake and took great pleasure in meticulously maintaining the property. It was there he hunted, fished, entertained family and friends and hosted countless Monday night fishing outings. He loved sitting around a campfire and always had a tall tale to tell or recipe to share. It was the place where he felt most like himself and was most at peace. Dick loved life and lived it to the fullest. He had unlimited energy, made friends with ease, and always had a project or two or three that he was working on for himself or to help a friend. He had a special talent for creating fun and spreading joy. Dick acted as Santa for the neighborhood children, made handcrafted wooden gifts to give, took his granddaughters, and anyone else who was willing, to swim and fish on the lake, and often had his grill filled to capacity when entertaining friends and family. He was a gracious host who wanted everyone to enjoy themselves and went out of his way to ensure they did. His kindness and generosity will be missed by many who knew him. Preceding him in death were his parents and sister, Marilyn Frink. He is survived by his wife, his daughter Katie Stults, son-in-law Ryan Stults, granddaughters Evelyn and Addison, brother Thomas Moses, mother-in-law Rosemary Kennedy, sister-in-law Lori Moses, sister-in-law Susan Read, brother-in-law John Kennedy, many well-loved nieces and nephews and extended family in Binghamton, NY. Friends and family are invited to celebrate Dick’s life at an outdoor gathering on Sunday, August 29, from 10:30 AM to 12:30 PM at Reynolds Jonkoff Funeral Home. Please direct memorial donations to the charity of your choice.

Richard (Dick) Addison Moses passed away at the age of 72, on August 18, 2021, at Munson Medical Center in Traverse City. He was born in Pontiac, Michigan to Evelyn (Mann) and Raymond W. Moses, grew up in Southfield, Michigan and graduated... View Obituary & Service Information

The family of Richard "Dick" Moses created this Life Tributes page to make it easy to share your memories.

Richard (Dick) Addison Moses passed away at the age of 72, on...