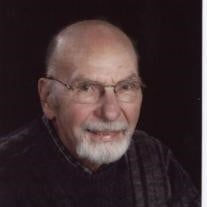 Long Lake – Richard M. Nash, 88 of Long Lake quietly slipped into the presence of the Lord on August 7, 2012. Richard was born on April 1, 1924 in Detroit to the late Marion and Bertha (Wright) Nash. On May 15, 1948 he married the former Nell Jeanne Walker in Flint. Together they have shared 64 years of marriage. Dick proudly served as a gunner with the 166th AAA Gun Battalion while a member of the United States Army during World War II in the Southwest Pacific. The 166th was awarded both a Presidential Unit Citation and a Philippine Presidential Unit Citation for its distinguished service in the Philippines. The US Presidential Unit Citation is the highest award given by the US Army for unit service. Dick has written his memoirs entitled “I Still Remember”, which is located in the Library of Congress, as well as our local libraries. After returning from the war, Dick went to work for General Motors as a Tool and Die Maker and worked there for 33 years. When he retired, he and Nell relocated to Long Lake in Traverse City. In his spare time Dick enjoyed wood working and building his home. He loved spending time with his family and was very proud of their accomplishments. Dick is survived by his wife Nell, sons Jim (Ann) of Traverse City, Bill (Cheryl) of Bolingbrook, IL, Rick (Laurie Anne) of Moran, MI, and daughter Laurie (Scott) Anderson of Columbia, TN, as well as 11 grandchildren and 12 great grandchildren. He was preceded in death by his parents and sister-in-law Ann Wolters. Visitation for family and friends will be held on Friday, August 10, 2012 from 4 to 6 p.m. at the Reynolds Jonkhoff Funeral Home. The funeral celebrating Dick’s life will take place on Saturday, August 11, 2012 at 10 a.m. at the Inland Baptist Church in Interlochen. Graveside services will follow at Long Lake Township Cemetery where he will receive full military honors. Memorial contributions in memory of Dick may be directed to Munson Hospice or to the Inland Baptist Church. Please visit www.reynolds-jonkhoff.com to share your thoughts and memories with the family. The family is being served by Reynolds Jonkhoff Funeral Home.

The family of Richard Marion Nash created this Life Tributes page to make it easy to share your memories.