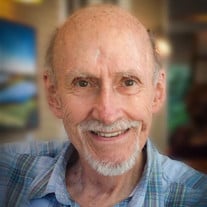 Richard Dale Peterson died at home, embraced by his family, on April 28, 2018. When asked how he wanted to be remembered, Rich said: "He evolved from stardust, and he was bedazzled by that concept. He was lucky in parentage, marriage, and progeny." Rich was known for his keen intellect, insatiable curiosity, musical talents, creativity, clever humor, and love for his family. If he had an interest in a topic or desire to learn a skill, he would research it doggedly and become an expert or practice until he became skilled. He had a wonderful belly laugh and liked to have fun as well as study. Rich was born in Grand Rapids, Michigan, on October 24, 1934, to William Peterson and Bertha Cora (DeKorne), both of Grand Rapids. He grew up on Grove Street in the same home where his mother was raised. Summers meant a trip to Glen Lake in Leelanau County to stay in "Gram's Cottage." After graduating from Grand Rapids Christian High School, Richard went to Calvin College, where he met Alyce Jean Smith. They entered their 61-year marriage three years later. Richard earned a Bachelor's Degree in Mathematics and then in 1957 was commissioned at the U.S. Naval Schools Command in Rhode Island. Rich’s time in the Navy and subsequent civilian career as a mathematician and engineer took the couple across the country, beginning in Hawaii, where first son Jeffrey Dale was born. In Annapolis, Maryland, Rich taught at the Naval Academy. There, he and Alyce lost their second son, Phillip Edgar, as a newborn. In Indiana, he taught at Purdue University, earned a graduate degree in Math, and welcomed daughter Valerie Jean. Rich and Alyce ultimately moved to Southern California, where he worked for more than 20 years as a systems analyst for Lockheed in Burbank. There, daughter Nancy Joy and son Brian David joined the family. Rich and Alyce raised their family in Sunland, California. Rich was a man with a multitude of interests and hobbies. He was ahead of the curve in several areas, including computer and other technology (building his own solar heating system for the family swimming pool before it was popular). His love for music began in the third grade and lasted all his life. He played the trombone in bands and directed and sang in numerous choirs – a beautiful and memorable tenor voice. He collected and listened to music in all forms, with a special affection for opera. Rich was a space enthusiast and followed space exploration with great interest, keeping his friends and family apprised of new developments and upcoming events. He also loved nature, and took the family on many trips across the country to see national parks. With dreams of homesteading, he earned a second Master's degree in Environmental Science from West Coast College. Photography was another one of Rich’s passions, and an outlet for his love of walking in nature. Family and friends have framed his stunning photos of Death Valley, the Pacific Ocean, Descanso Gardens, Sleeping Bear Dunes, Kauii, and many other locations. He loved to hike and often organized daytrips in the desert and near the beach. Rich and Alyce enjoyed traveling and took several memorable trips to Hawaii, Europe, and around the country to visit their children and grandchildren. After retirement, they returned to their roots in Michigan. They designed and built a beautiful home in Glen Arbor in Leelanau -- a land of lakes, dunes, woods, and birdsong. Rich/Dad/Grandpa will be dearly missed by his family: son Jeffrey, his wife, Sandy (Sterkenburg) Peterson, and children Julia and Scott (Grand Rapids); daughter Valerie Harkins, her husband Gordon, and their children Amy and Declan (Yorktown Heights, NY); daughter Nancy Peterson, her husband Bill Garcia (Johnson City, TN), and son Phillip Goldfarb (Baltimore, MD); son Brian, his wife Lori (Shimizu) Peterson, and their children Kyle and Katelyn (Stevenson Ranch, CA); brother Glen Peterson (Grand Rapids); sister Nancy (Peterson) Crater; sisters-in-law Romaine Jesky Smith, Elsie (Stonehouse) Peterson, Mary (Burkhalter) Peterson, and Mary Ruth Smith; cousins; many nieces and nephews; and a loving extended family in England. Rich's family would be honored by memorial contributions to The Leelanau Conservancy at https://leelanauconservancy.wufoo.com/forms/p2x4bk8097jftn/ or The Planetary Society's Planetary Fund at https://secure.planetary.org/site/SPageNavigator/supportprojects.html#support-planetaryfund An online guestbook is available at www.reynolds-jonkhoff.com, where you may share your memories with the family. Rest now, Dad, you've taken your time and done a good job. You've loved your family well, and we carry you in our hearts. Take Mom's hand, explore the universe, and answer all your questions.

Richard Dale Peterson died at home, embraced by his family, on April 28, 2018. When asked how he wanted to be remembered, Rich said: "He evolved from stardust, and he was bedazzled by that concept. He was lucky in parentage, marriage, and... View Obituary & Service Information

The family of Richard Peterson created this Life Tributes page to make it easy to share your memories.

Richard Dale Peterson died at home, embraced by his family, on...