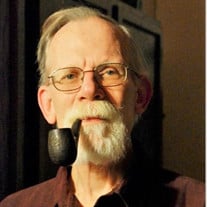 Richard Allen Plahna, 73, suddenly passed away in his Interlochen home on March 20, 2021. His wife of 24 years saw him as “The most honest and kind person I knew, the love of my life, my best friend and a true gentleman.” He was born on Sept. 6, 1947 in Burlington, WI to the late Eric and Eleanore Plahna and grew up in the town of Cudahy, WI. After graduating high school, he volunteered to serve in the US Marine Corps for 4 years during the Vietnam War era. He reached the rank of Sergeant E-5 and was honorably discharged in 1971. He attended Metropolitan College of Business & Technology in Milwaukee and completed the program of Advanced Systems in computer programing in 1971. He then attended the University of Wisconsin Whitewater and graduated Cum Laude, earning a Bachelor of Science Degree in English in 1976. He later worked as computer programmer and operator at Tampa General Hospital, FL and also for the Raymond James home office in St. Petersburg, FL. After marrying Kim Angel in FL, they moved to the Traverse City area to help family members with health issues in 1997. During that time he worked for the US Post Office in the Traverse City processing plant until he retired in 2012. He loved baseball and had a secret wish to be able to play in the major leagues. “They throw it – I hit it” was his favorite quote from Willie Mays. He often challenged events in his life with this phrase. He was an avid cruciverbalist and also enjoyed yoga exercises, baking bread, family get-togethers, and dining out with Kim. Writing was one of his favorite hobbies and he completed daily installments of his thoughts and stories. He also collected and read many books, especially loved Shakespeare and diligently studied the Bible in his later years. He was a truth-seeker who ultimately found its reality and beauty in simplicity, love and the person of Jesus Christ. He is survived by his loving wife Kim; his brother Eric J. Plahna of WI; sister in-law Pamela Tober of CA, her daughters Juliana Ekong (of NJ) and Eno Smith (of CA) and their families; step children Mike Steffes, Melonie Steffes (Shaun Anchak) and Grandson Seamus Callaghan all of MI; and nieces and nephews: Kurt (Emily), Natalie, and Paige Plahna of WI and E. Joseph (Leigh) Aiden, and Daniel Plahna of MA. A private memorial service will be held at a later date. Please direct any contributions to the Father Fred Foundation or a local charity of your choice. Please feel free to share your thoughts and memories with Richard’s family at his tribute page at www.reynolds-jonkhoff.com. The family is being cared for by the Reynolds-Jonkhoff Funeral Home and Cremation Services.

The family of Richard Allen Plahna created this Life Tributes page to make it easy to share your memories.

Richard Allen Plahna, 73, suddenly passed away in his Interlochen...