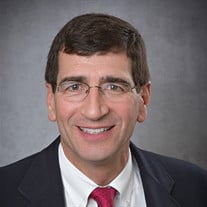 TRAVERSE CITY - Richard “Rick” A. Deneweth, of Traverse City, passed away peacefully at home on November 11, 2016. Rick was born September 4, 1957, in Grosse Pointe Woods, Michigan, to Edna (nee Rondina) and Raymond Deneweth. Rick was a 1975 graduate of Austin Catholic Prep High School (Detroit) and went on to receive his BS in Business Administration from John Carroll University, graduating with honors. He subsequently became a Certified Public Accountant and earned his Juris Doctor, Cum Laude, from Detroit College of Law in 1986, now known as Michigan State College of Law. Rick served over thirty years in the business community, including as Vice President of Comerica Bank and Senior-in-Charge Emerging Business Department at Deloitte Haskins & Sells. After relocating to Northern Michigan, Rick served as Owner/President of Northern Michigan Operations for Cornillie Concrete, President of the Northern Michigan Operations of the Michigan Region for US Concrete, member of the Board of Directors for the Northern Michigan chapter of the Associated Builders and Contractors, Chairman of the Michigan Concrete Association, and member of the Board of Directors for the Grand Traverse Area Home Builder’s Association. At the time of his death, Rick was Joint Managing Partner of Copper Ridge LLC, Owner/Associate Broker of Three West LLC, Director for Cherryland Electric Cooperative, Chairman of the Board of Directors of Wolverine Power Supply Cooperative, and Co-Owner of LC Materials, a concrete supplier. Rick was a member of the Michigan Bar Association; Michigan Association of Certified Public Accountants; and National, Michigan, and Traverse City Associations of Realtors. Along with being devoted to growing the local business community, Rick was an avid supporter of local hockey. Among many volunteer activities, he served as President of the Bay Reps Michigan High School Hockey team. He was known for his commitment to his family and community, generosity, strong work ethic, high moral integrity, professional excellence, and devotion to his Catholic faith. He espoused a deep love of his country and a commitment to veterans. This included fundraising for the Honor Flight program, which provides transportation and escorts for World War II veterans to visit the memorial in Washington, D.C. Rick loved cheering his sons, nephews, and nieces in their academic and sporting endeavors, debating conservative politics, following the Detroit Red Wings and MSU Spartans, and caring for his home and landscaping. A devoted husband, father, son, brother, uncle, and friend, Rick touched countless lives and will be forever missed by his family, friends, and associates. Rick is survived by his best friend and loving wife Connie (nee Pulte), sons Raymond James (RJ) and Christopher, and brother, Ronald (Mary). Rick was preceded in death by his parents, Raymond and Edna Deneweth; brother, Robert Deneweth, parents-in-law; James and Mary Pulte, and sister-in-law Joanne Pulte Recart. Visitation will be held for family and friends at St. Francis Catholic Church on Thursday, Nov. 17, 2016 from 5 to 9 p.m., with a scripture vigil service prayed at 8 p.m., a Mass of Christian Burial will be celebrated at the church on Friday, Nov. 18, at 4 p.m. with a visitation held two hours prior from 2 to 4 p.m., Father Greg will be the officiant. In lieu of flowers, memorials to the Grand Traverse Area Catholic Schools Building Fund or charity of choice are appreciated. Please share your thoughts and memories with Rick’s family by way of his online guestbook at www.reynolds-jonkhoff.com. The family is being cared for by the Reynolds-Jonkhoff Funeral Home and Cremation Services.

The family of Richard "Rick" A. Deneweth created this Life Tributes page to make it easy to share your memories.